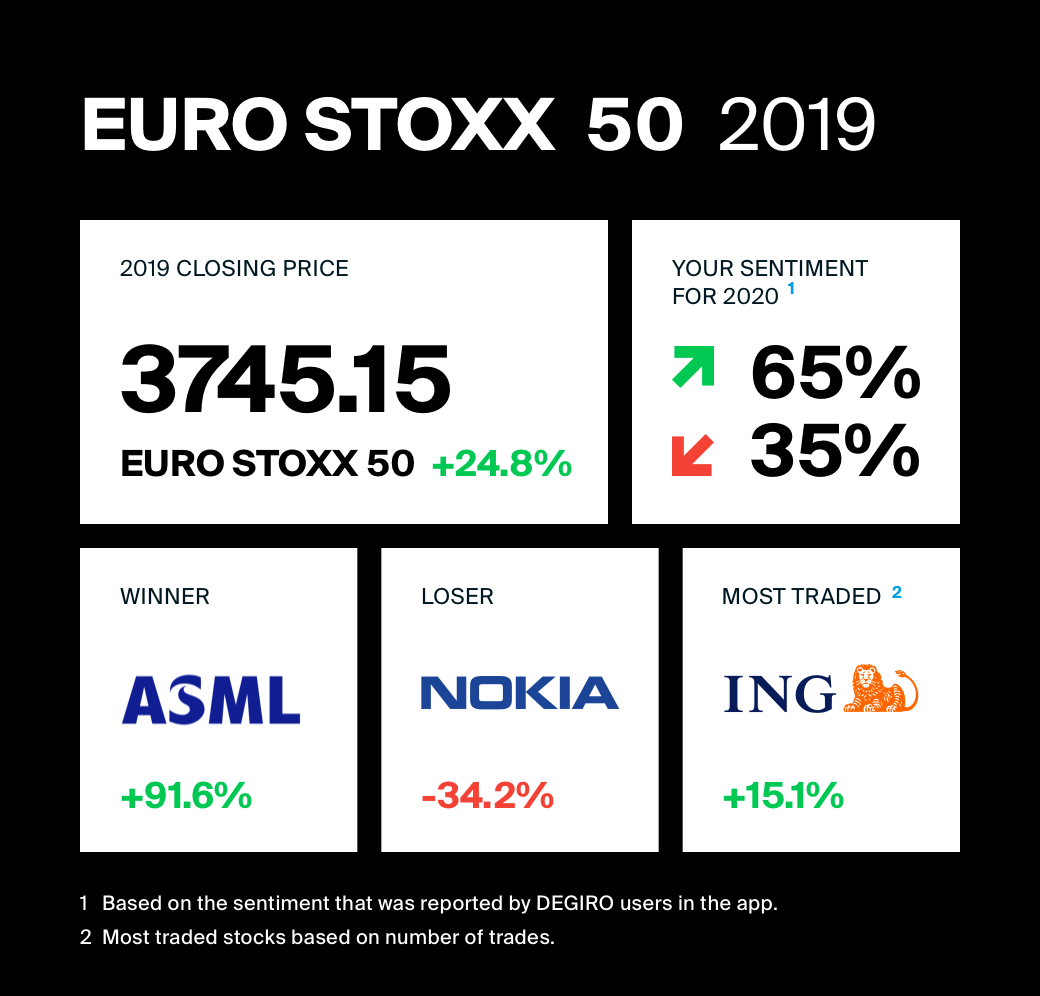 The most traded stock out of those included in the EURO STOXX 50 index is ING Groep. Originally from The Netherlands, ING is a global financial entity providing wholesale and retail banking services to private clients, businesses, and governments. ING ended 2019 up 15.1%.

ING disclosed net results of €1,119 million in Q1, €1,438 million in Q2, and €1,344 million Q3. Although there was a decrease from Q2 to Q3, ING reported important milestones achieved in Q3 in combatting climate change, something that ING is committed to. To name a few, ING signed the UN-backed Principles for Responsible Banking and was followed by the signing of the Collective Commitment to Climate Change. They also signed the Dutch Climate Agreement, an interpretation of the Paris Agreement. And the company released its first progress report on Terra, which is ING’s approach to steer its portfolio and lending book in line with the goals of the Paris Agreement.

ING Groep trades under the ISIN code NL0011821202 and is available to trade on our platform on Euronext Amsterdam, Xetra, Börse Frankfurt, Borsa Italiana, and the SIX Swiss Exchange.

The biggest winner out of the EURO STOXX 50 stocks in 2019 is ASML Holding, finishing the year 91.6% up. ASML is a global company in the semiconductor industry and is a manufacturer of chip-making equipment. The company provides chipmakers with the hardware, software, and services that they need to mass produce patterns on silicon through lithography. Some examples of companies that ASML supplies their products to are TSMC, Intel and Samsung. Moreover, in October it was reported that Samsung had ordered 15 EUV chip machines, each costing more than €100 million.

ASML’s ISIN code is NL0010273215 and it is available to trade on our platform on Euronext Amsterdam, Xetra, Börse Frankfurt, and the SIX Swiss Exchange.

Although Nokia gained the most in 2018, they were this year’s biggest loser, having decreased 34.15% from the beginning of the year. Nokia is a Finnish multinational communications and information technology company.

In Q1 2019, Nokia reported a surprise quarterly loss. In Q2, Nokia surpassed analysts’ forecasts and revenues rose 7% year-over-year. They also beat market expectations in Q3 2019; however, profits were down 27% from the year prior. Following this, the company announced a cost-cutting plan, which targets an annual cost savings of €700 million by the end of 2020.

Nokia’s stock price dropped as much as 25% in October, the biggest intraday decrease since 1991. This was followed after the company cut its outlook and temporarily suspended its dividends to focus on 5G investments. Once its net cash position improved to about €2 billion, Nokia plans to resume dividend distributions. There has also been an increase in competition within the 5G environment from companies such as Ericsson and Huawei. Therefore, Nokia is not expected to gain as much market share in the 5G sector as initially anticipated. However, Nokia ended 2019 partnering up with Vodafone whereby Nokia will be helping Vodafone roll out its 5G network to Vodafone users in Australia. The company expects that its earnings should recover in 2021.

Nokia trades under the ISIN FI0009000681, and can be traded on our platform on OMX Helsinki, Euronext Paris, Xetra, OMX Stockholm, Börse Frankfurt, the Prague Stock Exchange, and the SIX Swiss Exchange.

Within our app, you are able to report your views of the upcoming performances of various major indices. Based on what clients reported, sentiment for the EURO STOXX 50 in 2020 was up 65% and down 35%. Its less than it was for 2019, where sentiment was 70% up and 30% down. Those reported positively were right, as the EURO STOXX 50 saw a yearly increase of 24.8%. Fingers crossed for another positive result in 2020!

Would adding one of these companies to your portfolio help to diversify it? With DEGIRO, a diversified portfolio is easily obtainable with access to more than 50 exchanges across 30 different countries. In addition to our global reach, we also offer investing with incredibly low fees so the impact of transaction costs on your return is minimised.

Most traded stocks by country: December