Top 3 winners and losers in market cap amid COVID-19

The COVID-19 pandemic has shaken up the financial markets in unprecedented ways and impacted companies and sectors differently. During the volatile markets in the first half of 2020, big tech companies gained the most in terms of market cap, whereas oil and financial firms lost the most. In this article, we discuss the companies that have gained and lost the most from the beginning of the year to 17 June 2020.

The Financial Times issued a report in June 2020 indicating 100 companies with the most equity value added from 1 January 2020 to 17 June 2020. Out of these, companies in the technology sector collectively outperformed the others. Below are the biggest winners:

Amazon was the ultimate winner, adding around $401.1 billion to its valuation in just over six months with prices soaring by 42.92%.

During the first half of the year, stay at home measures and travel restrictions were put in place, forcing many to rely more on ordering goods online. Demand for products on Amazon grew as brick-and-mortar stores closed and health concerns rose. To keep up with orders and provide customers with necessities while being confined to their homes, Amazon announced in March 2020 that it would temporarily only be accepting essential supplies in its warehouses. Even with such restrictions put in place at the end of the quarter, net sales were up by 26% year-over-year.

Amazon disclosed at the end of April 2020 that it would be investing approximately $4 billion on COVID-related initiatives that will, for example, mitigate risks for its employees and get products to customers safely.

Microsoft takes the number two spot. The tech giant’s stock prices jumped by 23.17% in the aforementioned timeframe, resulting in approximately $269.9 billion added to its market cap.

Microsoft has a deep portfolio of products and services, some of which that have done exceptionally well during the coronavirus pandemic. In June 2020, Microsoft said that all of its cloud services, particularly Azure, Microsoft Teams, Windows Virtual Desktop and Xbox live, experienced unparalleled demand. Due to its significant growth in digital storefronts, Microsoft announced at the end of June 2020 that it will be permanently closing all of its physical stores. Microsoft is one among many others that has had to rethink or reassess strategies to adapt and remain competitive in a post-COVID world.

Coming in a respectable third is Apple. The company added $219.1 billion to its market cap with share prices increasing 19.73% from the beginning of the year to 17 June 2020.

In the first quarter, the company reported a 1% revenue growth that beat analysts estimates, despite all of its stores being closed at some point. Apple said that late March and early April 2020 was a “very depressed” period but saw improvements in the second half the month. It also did not provide a forecast for the first time in over a decade.

One area of Apple’s business that has done well amid the pandemic is its App Store. In April 2020, the App Store brought in $1.7 billion in net revenue, 31% more than the same period year-over-year. 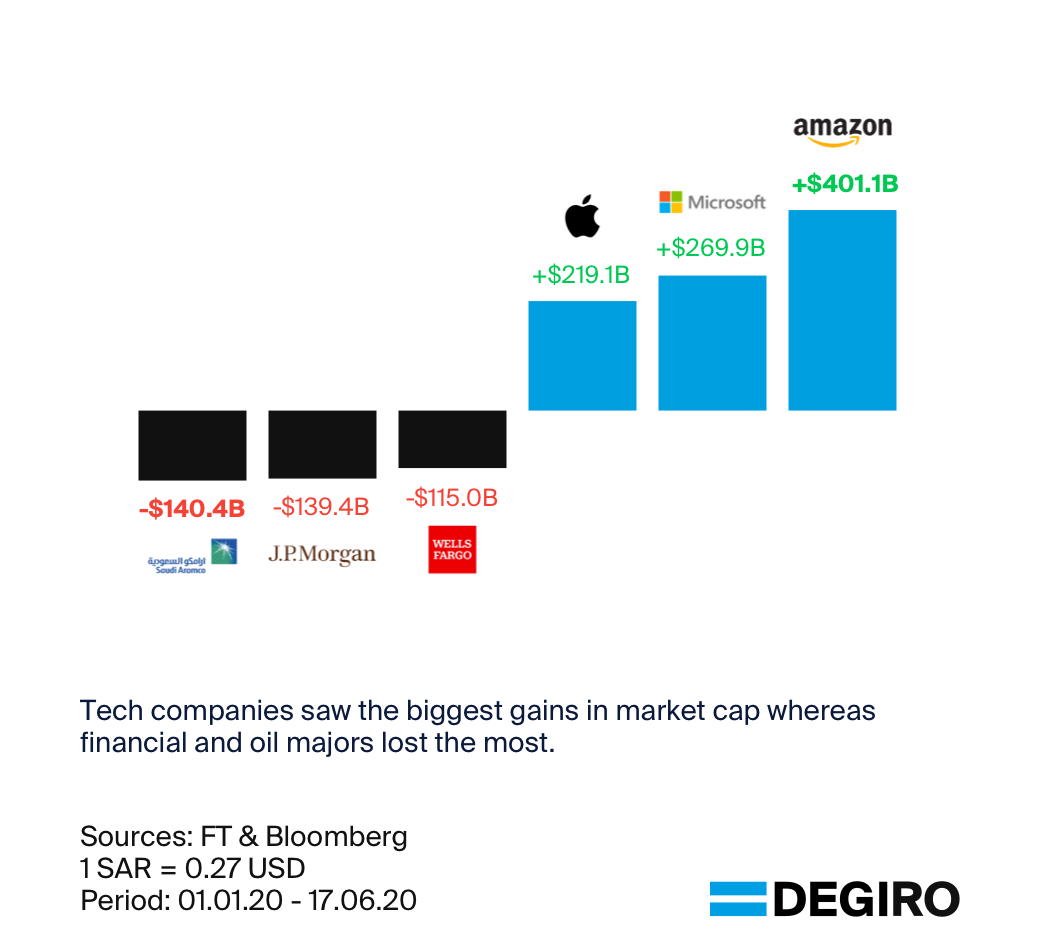 While some have prospered in the midst of the pandemic, many companies and sectors have been adversely impacted. A Financial Times report disclosed 25 companies that have experienced the biggest losses in market cap from the beginning of the year to 18 June 2020. Out of these companies, 18 companies are in the financial or energy sectors. From this information, we looked at market cap values from 1 January 2020 to 17 June 2020 to allow for comparison to the winners. Below are the biggest losers during this period:

Saudi Aramco is the biggest company in the world and also the biggest loser during this period, with $140.1 billion in market cap being erased. Its share prices declined by 7.38% in this timeframe.

The oil-producing giant reported a 25% drop in profit year-over-year in the first quarter. Even with profits down, Saudi Aramco has not announced any plans to cut its dividend. Other oil companies, including Royal Dutch Shell, have made that move as a way to save capital. The company said that it has been making expenditure cuts in other areas and foresees demand in energy rebounding as economies recover.

As you may know, oil prices were hammered earlier this year due to the implications of COVID-19, and future prices even plunged into negative territory in April 2020. In late March and early April 2020, global demand fell around 30%. However, in June 2020, Bloomberg reported that consumption has picked up and is 10-15% below normal levels. Oil prices have also made a comeback and are on track for their best quarter since 1990.

JPMorgan Chase & Co. is second on the list, losing $139.4 billion in market cap. In the relevant period, share prices for the largest US bank decreased by 28.64%.

JP Morgan’s profits in the first quarter were 69% lower than the same period in the year prior. It was the lowest level that the company has seen in six years. The drop was in part due to a $6.8 billion addition to loan loss provisions. JPMorgan cited that the additional reserves reflect economic environment caused by implications of COVID-19 and pressure on oil prices.

Although net revenues were down in the first quarter, the bank’s trading sector profited from the volatility in markets during this period. Revenue from trading was the most on record at $7.2 billion, up by 32% year-over-year.

CEO Jamie Dimon said in his letter to shareholders earlier this year that the bank could potentially cut its dividend if the coronavirus crisis deepens. However, its payouts for the third quarter have been unchanged at the time of writing.

Wells Fargo comes in third as it lost $115.0 billion in market cap. Out of the biggest losers, the bank’s share prices fell the most at 48.98%.

Wells Fargo’s first quarter results showed an 89% decrease in net income. Similar to JPMorgan, the bank set aside addition reserves for bad loans. It allocated $4 billion to loan loss provisions, five times the amount it did year-over-year and the most it has in a decade.

In 2016, Wells Fargo was accused of fraud due to the creation of millions of fraudulent client accounts without their consent. As a result, the bank was forced to pay a $3 billion fine in February 2020. In addition, Wells Fargo was required to confine assets to its end-of-2017 level, limiting its growth. However, in April 2020, the Fed temporarily modified these restrictions to allow Wells Fargo to assist small businesses impacted by the pandemic by expanding lending.

Compared to some of its competitors including JPMorgan, Wells Fargo has not been able to maintain its dividend. The firm announced at the end of June 2020 that it would be reducing dividend payouts. The size of the reduction will be announced mid-July 2020.

Are you interested in investing in one of the companies mentioned in this article? You are able to invest in every company with the exception of Saudi Aramco as it trades on the Saudi Tadawul, which we do not offer. Fees vary for all other exchanges. For details, please visit our Fees Page.