Most traded stocks by country: September 2020

The end of September marks the end of another month of trading as well as the third quarter. The EURO STOXX 50 posted losses, decreasing by 2.41% at the end of the month. Taking the full quarter into account, the index closed Q3 down by 1.25%, and it is down by 14.73% from the beginning of the year.

In this article, we discuss Tesla due to its significant presence on the map and the biggest winner and loser. 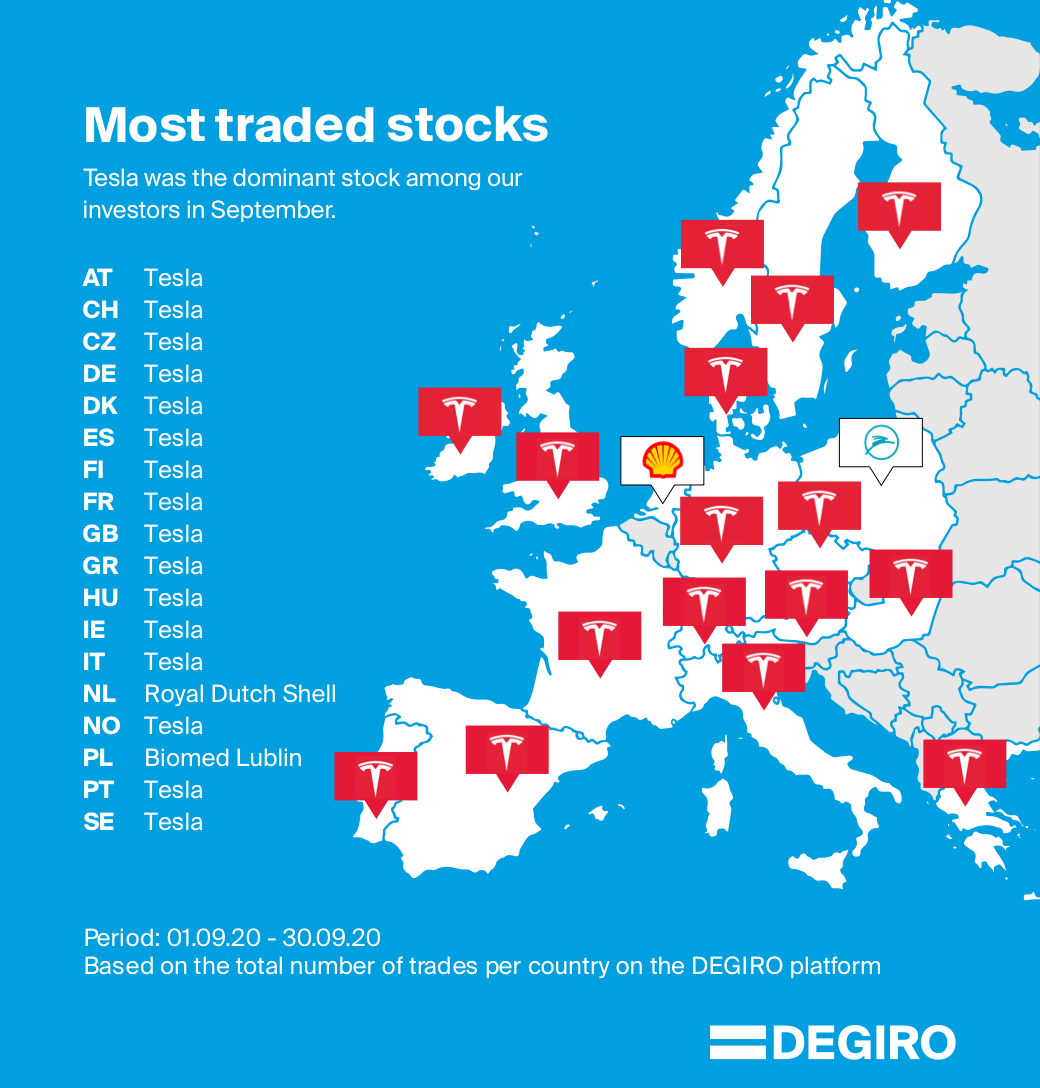 Tesla takes over the map

Tesla has been the dominant stock on the map before, but never to this extent. It was traded the most in 16 out of the 18 countries that we are active in.

While stock prices were down for the electric car maker, some big announcements were made during the month. First, the company will shift its strategy by shipping cars made at its factory in Shanghai to other countries in Asia and Europe, according to people familiar to the matter. These efforts will enable Tesla to focus on supplying the local market.

Tesla also held a shareholder meeting and its annual ‘Battery Day’ in September. One of Tesla’s more significant announcements was plans for a $25,000 yet-to-be-named car. The $25,000 price point will be a result of Tesla’s plans to halve battery prices over the next three years. Elon Musk also revealed that the Model S Plaid will go into production in late 2021. This version of the company’s flagship sedan is priced at $140,000 and will be able to go from zero to 60 miles per hour (97 kilometers per hour) in under two seconds.

There wasn’t a real winner last month as all three companies on the map saw price decreases at the end of September. However, Poland-based biotech company, Biomed Lublin, was the winner out of the three decreasing by 11.84%.

On the other hand, Tesla was the loser decreasing by 13.91%. On September 8th, share prices fell by more than 21%, its biggest drop since it went public in 2010. This came after Tesla was passed over from being included in the S&P 500.

Would you like to invest in one of the companies seen on the map? For all stocks trading on US exchanges, we offer a low fee of €0.50 + $0.004 per share. Fees vary for all other exchanges. For details, please visit our Fees Page.

In addition to these, we offer a multitude of other companies and financial products to invest in on more than fifty exchanges across thirty countries. For details, please visit our Products and Markets page.

Most traded stocks by country: August 2020

Most traded stocks by country: July 2020