At the end of every month we take a look at the performance of the EURO STOXX 50, the sentiment that was reported by clients in the app, and the most traded stocks through our platform. 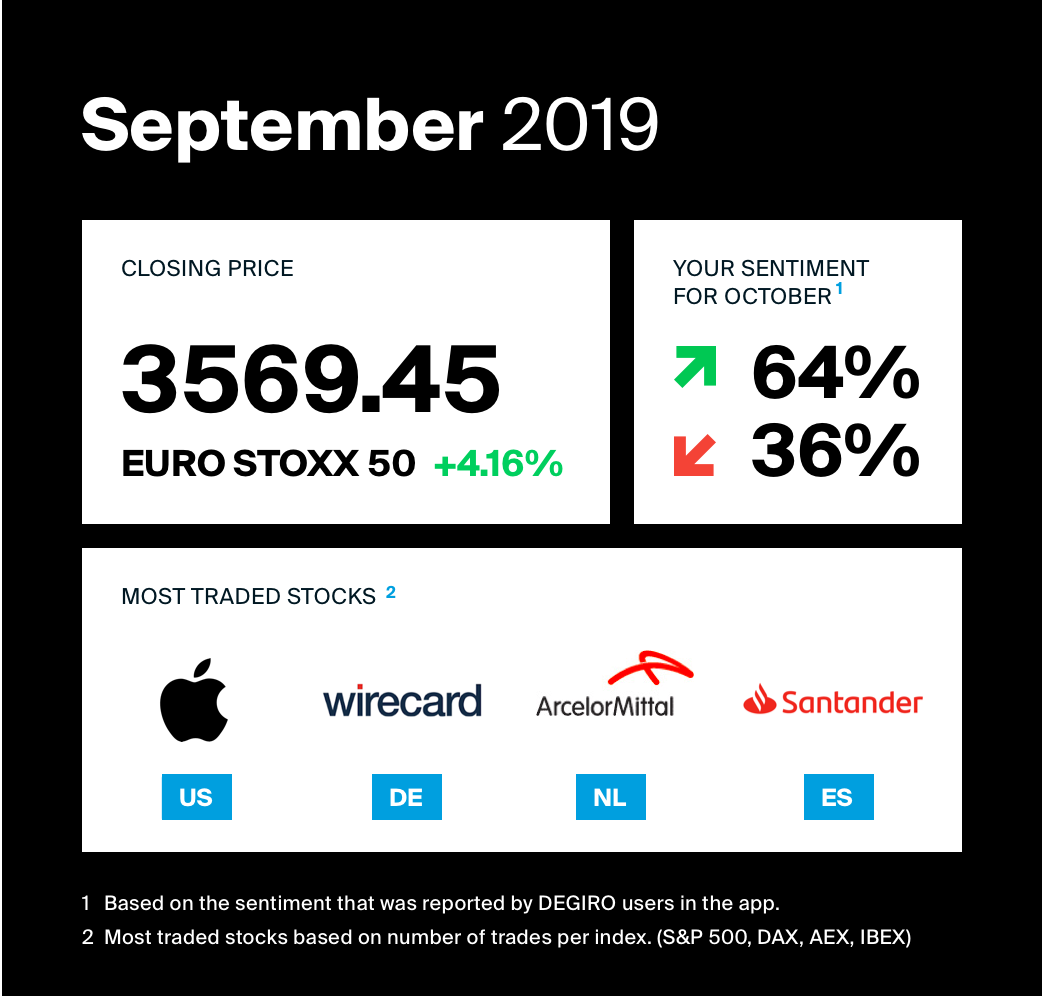 The most traded stocks through DEGIRO this month were Apple, Wirecard, ArcelorMittal, and Santander. These are the top traded based on number of trades per index on the S&P 500, DAX, AEX and IBEX.

The top traded US stock this month was a fan favorite, Apple. It’s not the first time that Apple has been the most traded US stock through DEGIRO. September in particular was a pretty big month for Apple. On September 10th, the company released a press release announcing that their new streaming service, Apple TV+, will be launching November 1st in over 100 countries and regions for $4.99 a month. In addition to this, Apple’s iPhone 11 made its debut on September 20th. This model of the iPhone is priced at $699, which is $50 less than its successor, the iPhone XR. Since iPhone sales are down, Apple’s pricing strategy for the iPhone 11 could be one way in which Apple is trying to reach the hands of more people. Apple has also said that they are looking into diversify their streams of revenue in areas such as services.

Since the beginning of 2019, Wirecard has continuously been the top traded German stock via DEGIRO each month. If you haven’t heard of Wirecard, the company is a financial services provider who offers its customers electronic payment and risk management solutions. In September the company announced that they had signed a Memorandum of Understanding (MoU) with UnionPay, to form a global strategic partnership with one of the world’s biggest card issuers. One of the goals of this partnership is to support Wirecard’s growth in China. In addition to this, Wirecard and SoftBank signed the final documents for the issue and subscription of the Wirecard convertible bond and the strategic cooperation agreement.

ArcelorMittal was the top traded Dutch stock via DEGIRO in September. Created from the merger between Arcelor and Mittal Steel in 2006, ArcelorMittal is one of the largest steel-producing company in the world based on volume. ArcelorMittal is active in across 18 countries and produce steel for a wide array of industries including automotive, construction, packaging, and household appliances. On our platform, we currently have the Euronext Amsterdam, Bolsa de Madrid, Xetra, and Börse Frankfurt listings of ArcelorMittal available to trade. We have previously seen ArcelorMittal as the top traded Spanish stock back in May 2019.

This is the fourth consecutive month that we see Santander in the top spot for most traded Spanish stock. Towards the end of September, Santander released a press release announcing that they have become one of the founding signatories of the Principles for Responsible Banking. These principles were launched by 130 banks, representing more than $47 trillion in assets. Companies that have signed these principles are committing to support the Sustainable Development Goals and the Paris Agreement on Climate Change.