Each month, we take a look at the performance of the EURO STOXX 50, the sentiment that was reported by clients in the app, and the most traded stocks through our platform. 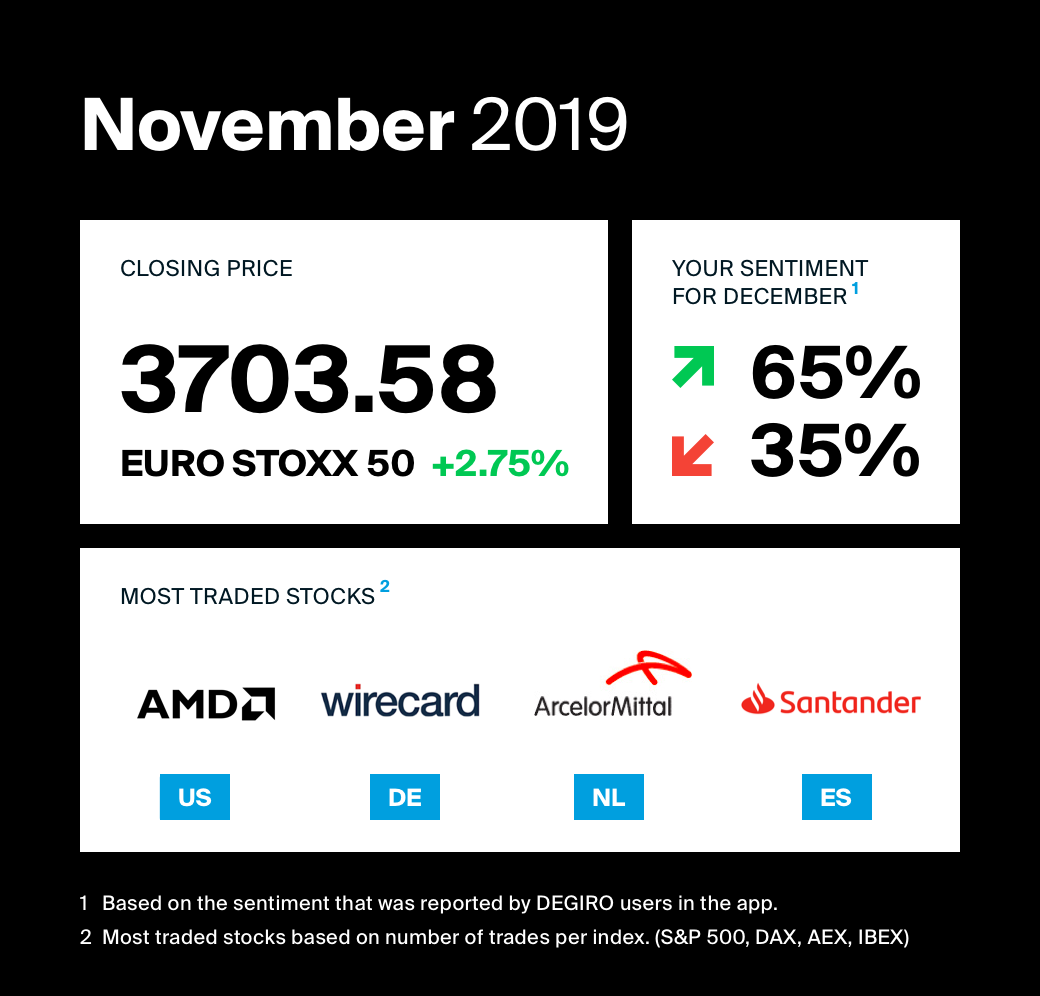 The most traded stocks through DEGIRO this month were AMD, Wirecard, ArcelorMittal, and Santander. These are the top traded based on number of trades per index on the S&P 500, DAX, AEX and IBEX.

Global semiconductor company Advanced Micro Devices (AMD) (ISIN: US0079031078) took the number one spot for most traded US stock this month. AMD has been around for over 50 years providing hundreds of millions of consumers with high-performance computing, graphics, and visualisation technologies. The company manufactures products including microprocessors, embedded microprocessors, chipsets, graphics, video and multimedia products. November has been an exciting month for AMD as they have introduced and launched several new products. They also announced that the latest Apple MacBook Pro will feature the new AMD Radeon™ Pro 5500M and 5300M mobile GPUs. Those who invested in AMD at the beginning of the year are likely not sorry that they did. AMD’s stock price has nearly doubled year-to-date.

Early in November, Wirecard announced their market entry into China as they acquired Beijing-based payment provider AllScore. As a result of the acquisition, Wirecard will be able utilise AllScore’s cross-border licenses and issue payment card to consumers and companies in China. After the deal closes, Wirecard will hold 80% of AllScore’s shares. Wirecard also announced a new cooperation with another Chinese company, leading travel payment company, YeePay. The two will partner up to expand YeePay’s payment processing services to customers outside of China. Wirecard reported that their potential transaction volume from this collaboration is over €17 billion a year. While Wirecard has been making efforts for expansion in China, it has also been under fire from allegations of inaccurate financial reporting in Singapore made earlier in the year. The company has denied accounting irregularities but the investigation continues.

The most traded Dutch stock this month was steel giant ArcelorMittal (ISIN: LU1598757687). The company released their Q3 results at the beginning of November, showing earnings that surpassed the highest analyst estimate. ArcelorMittal’s EBITDA for Q3 was $1.06 billion, which is a 61% drop from the same quarter in 2018. However, analysts had expected an EBITDA of $943.2 million. Despite beating expectations, ArcelorMittal said that demand in their core markets, Europe and the US, has remained weak. Aside from this, ArcelorMittal announced that they will be rolling out a new sustainability programme across Europe with the goal of receiving the ResponsibleSteel site certification. ResponsibleSteel is the industry’s global multi-stakeholder standard and certification initiative. One of its aims is to improve climate change and greenhouse gas emission. Each of ArcelorMittal’s Flat Products sites will be audited by a third party in order to receive the certification. CEO Geert Van Poelvoorde believes that this initiative is in line with ethical business standards that are important to their customers.

Santander (ISIN: US5949181045) was the most traded Spanish stock in November. At the beginning of the month, Santander announced a strategic £350 million investment in fintech start-up Ebury. Ebury is a UK-based trade and foreign exchange facilitator for small and medium-sized companies. The investment gave Santander a majority stake in the company with the goal to strengthen their Global Trade Services. Santander also released Fieeld, a device which has a touch system for broadcasting sports events. The device enables individuals who are blind to experience football in a new way by using fingertips to follow the movements of the ball and players. They have presented this just before the Libertadores Cup final in Peru, which is to be played between Flamengo from Brazil and River Plate from Argentina. This project is a tribute to Santander’s belief that football can have an impact on society and improve quality of life. Santander is looking for a technological partner to further develop the product and possibly market it.

Would you like to invest in AMD, Wirecard, ArcelorMittal, or Santander? Would adding one of these companies to your portfolio help to diversify it? With DEGIRO, a diversified portfolio is easily obtainable with access to more than 50 exchanges across 30 different countries. In addition to our global reach, we also offer investing with incredibly low fees so the impact of transaction costs on your return is minimised.