Most traded stocks by country: May 2020

As optimism was fueled by reopening economies and stimulus proposals, European and American stocks posted gains for the second month in a row. The EURO STOXX 50 and S&P 500 ended May up by 4.18% and 4.92% respectively. While those two major indices posted monthly gains, out of the stocks seen on the map, nearly half saw decreases in price. In this article, we share the sector that was traded the most and May’s biggest winner and loser. 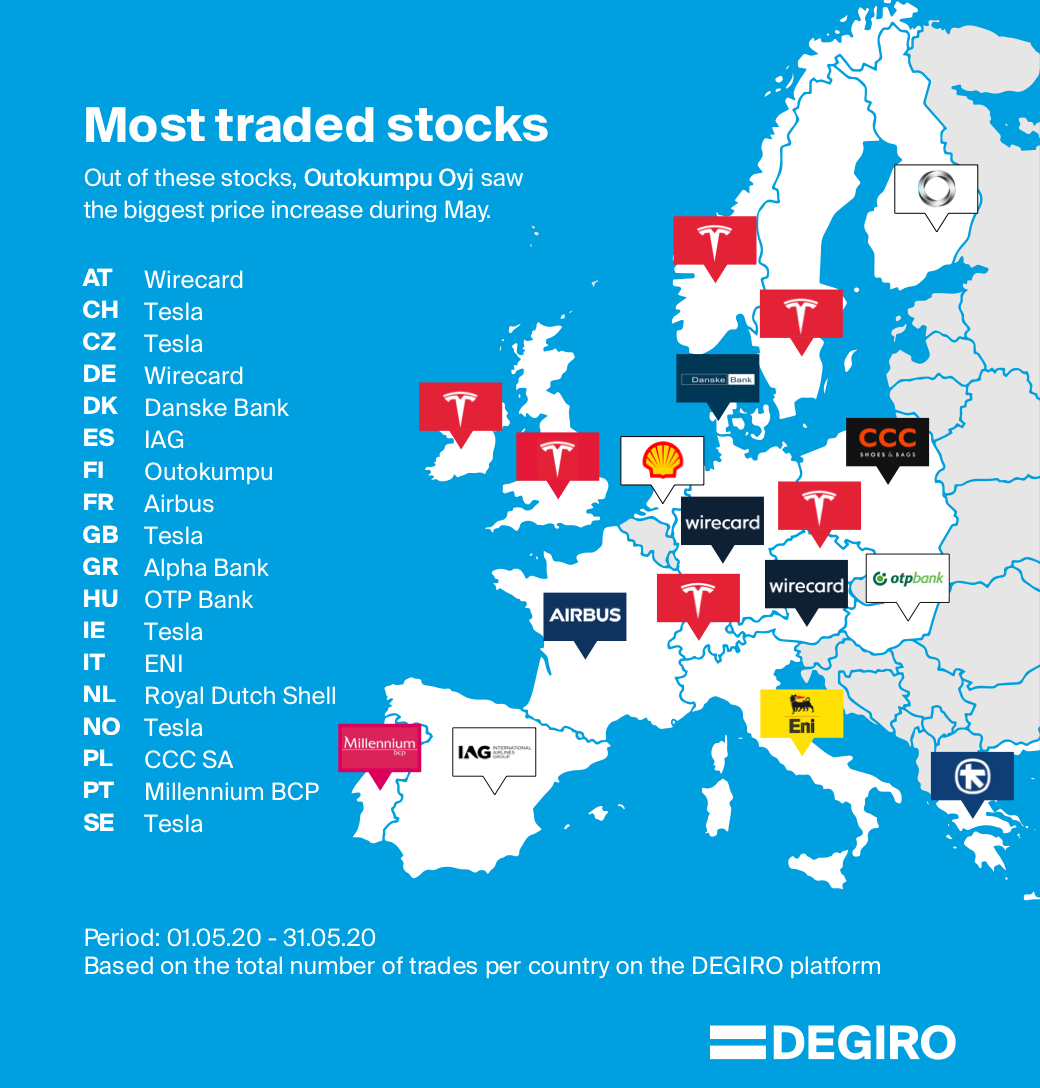 The automotive sector was again the most traded due to Tesla being the most traded stock in six of the eighteen countries that we are active in. Tesla CEO Elon Musk started May off by tweeting that in his opinion the company was overvalued, which was followed by a 10% drop in share prices that same day. However, prices quickly rebounded and ended the month up 6.8%.

After being shut down due to California’s lockdown measures, Tesla’s main manufacturing plant was able to reopen in May after CEO Elon Musk disputed with the local government about reopening. While production has been able to continue, demand is still down. It is projected that global auto deliveries will contract by 22% percent this year. To try to boost sales, Tesla cut car prices by approximately 6% in North America and China.

The automotive sector, like many others, has been massively affected by the pandemic. Production output has decreased, demand has fallen and countless jobs have been impacted. In May, lockdown measures in some parts of Europe eased up and showrooms were able to reopen. Car registrations are still down year-over-year, but France and Spain both saw improvements in May from April, showing a slight comeback. However, Bloomberg New Energy Finance does not expect global auto sales to recover for five years.

The companies that saw the biggest price movement during May were Outokumpu Oyj and Alpha Bank. On the positive end was Outokumpu, which ended the month increasing by 9.61%. On the negative side is Alpha Bank’s, ending May down by 16.79%.

Outokumpu is a small-cap stainless steel company headquartered in Helsinki worth around €1.13 billion. The company has production sites in the UK, Finland, Germany, Mexico, Sweden and the US and makes a wide range of stainless-steel products. Outokumpu released its first quarter earnings in May. Its operating profit nearly doubled year-over-year and accounted this to cost cuts and growth in its Americas business segment. However, the company warned that weakening demand became apparent in April 2020 and said that it expects deliveries to decrease in the second quarter by 10-20% compared to the first.

Alpha Bank is Greece’s fourth-largest lender and is also considered a small-cap with a market capitalisation of about €858.30 million. Like Outokumpu, Alpha Bank released its first quarter earnings during this month. It reported a €10.90 million loss from continued operations compared to €5.40 million in earnings from the prior quarter. Despite challenges brought by COVID-19, the company shared that it still plans to relaunch its ‘Galaxy Project’ during the second quarter. The Galaxy Project is a plan to cut its bad-loan pile by selling €12 billion of soured loans.

Most traded stocks by country: April 2020