Most traded stocks by country: March 2022

The end of March marks the end of the first quarter of the year. March was another grim month as the terrible war in Ukraine continued, resulting in unimaginable devastation for the people of Ukraine. We can only hope for an end to the war and for peace to be restored in Ukraine.

Last month, we saw more of the impacts of the war on the financial markets. For example, commodity prices swung wildly as sanctions on Russia have caused further supply constraints. US equities fared better than European peers, with the S&P 500 increasing by 3.58% and the EURO STOXX 50 dropping by 0.55%. 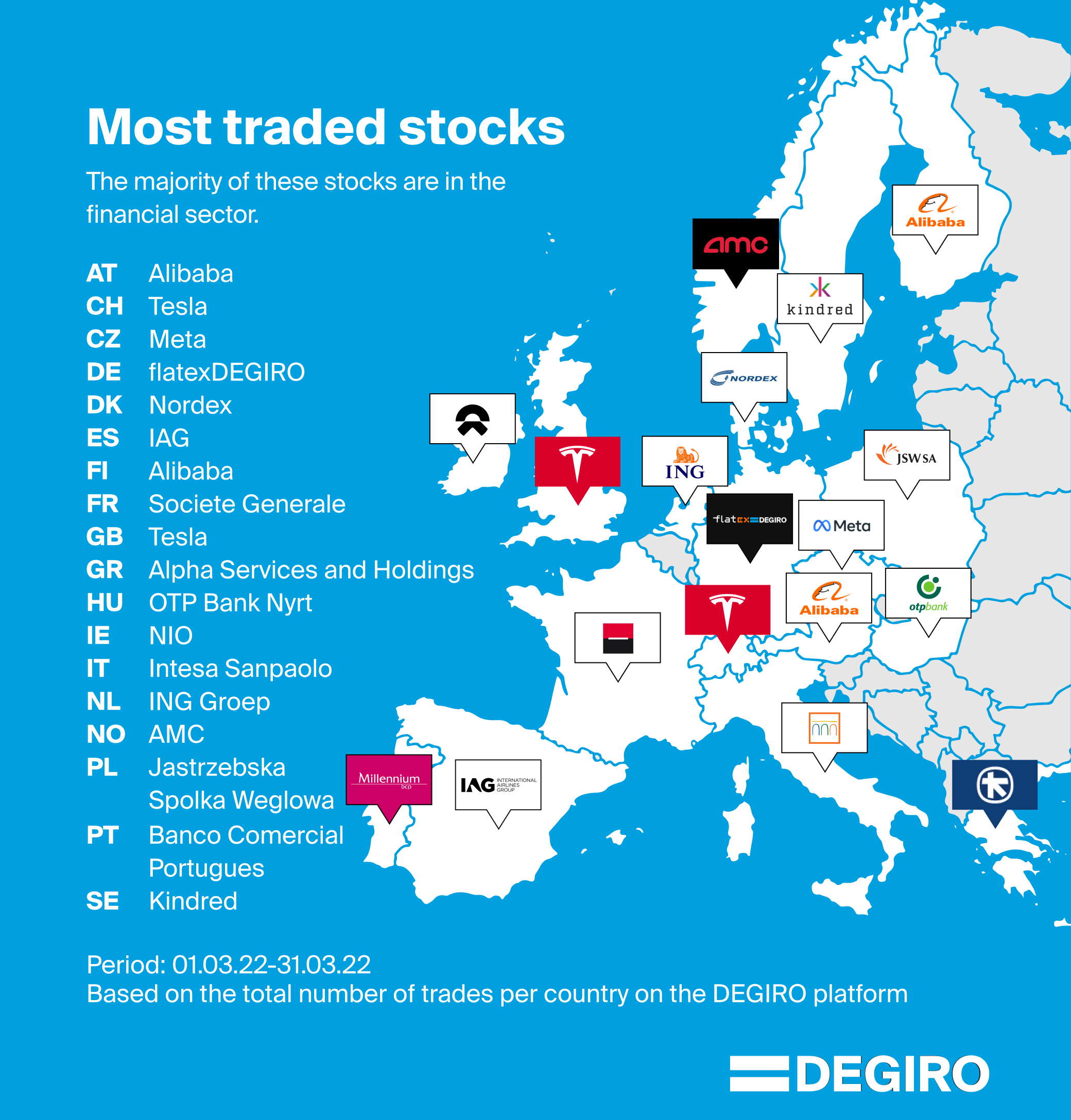 In March, five companies made their debut on our map, being traded the most for the first time. Since they are new, here’s a brief introduction of each:

Jastrzebska Spolka Weglowa (JSW) is a Polish coal mining company. The company is one of the largest producers of high-quality hard coking coal in the European Union. The company’s business activities are broken down into two main segments: Coal and Coke. The Coal segment includes the extraction and sales of black coal, and the Coke segment includes the production and sale of coke and hydrocarbons. JSW is involved in the steel industry, as its products are highly used for steel production.

Banco Comercial Portugues (BPC) is one of the largest private banks in Portugal. The group operates through several subsidiaries, such as Millennium bcp, ActivoBank and Millenniumbcp Ageas. BPC is active in Portugal, Poland, Mozambique, Angola and China.

At the end of March, BCP announced that it would be reinstating dividends after stopping them for two years. Stock prices were up by 4.85% at the end of the month.

Nordex is a Germany-based company that develops, manufactures and distributes wind turbines. It has production plants in many countries around the world, including Germany, Spain, India, Mexico and the US.

While Nordex’s stock price ended March slightly down by 0.31%, prices have increased since the Russian invasion of Ukraine on February 24th. Clean-energy stocks, including Nordex, have generally performed well amid the war in Ukraine as governments are making efforts to reduce dependence on imported fossil fuels from Russia.

SocGen has some of the highest exposure to Russia compared to other major European banks. SocGen reported having €18.6 billion in exposure to counterparties in Russia at the end of 2021, representing 1.7% of the group’s total exposure. In early March, the company warned it could be stripped of its business in Russia but says it has more than enough to ‘absorb the consequences of a potential extreme scenario’. SocGen’s stock price ended March down by 4.60%.

Another company in the financial sector that is a new name on our map is Intesa Sanpaolo, Italy’s biggest bank by total assets. The group’s biggest market is in Italy, but it also offers services to clients all over Europe as well as Asia, Africa and the Americas.

Similar to SocGen, Intesa also has exposure to Russia and Ukraine, which the company reported in mid-March being €5.7 billion. Intesa said it is conducting a strategic review of its presence in Russia and that it cannot confirm if the bank will hit its 2022 profit goal of €5 billion at this time. Prices decreased by 4.60% in March.

inancials had a strong presence on our map in March, with seven out of 18 stocks being in this sector. These include flatexDEGIRO, Societe Generale, Alpha Services and Holdings, OTP Bank Nyrt, Intesa, ING and BCP. All of these stocks ended March in the red except for BCP.

The companies that saw the biggest price movements out of the stocks on the map last month were JSW and ING. JSW’s 58.07% price increase made it March’s winner. ING was on the losing end, with prices falling by 9.43%.

Most traded stocks by country: February 2022

Most traded stocks by country: January 2021