Most traded stocks by country: July 2022

And just like that, another month of trading has come and gone. After posting consecutive months of losses, major indices, including the EURO STOXX 50 and S&P 500, ended July in the green. The S&P 500 even had its best month since November 2020. 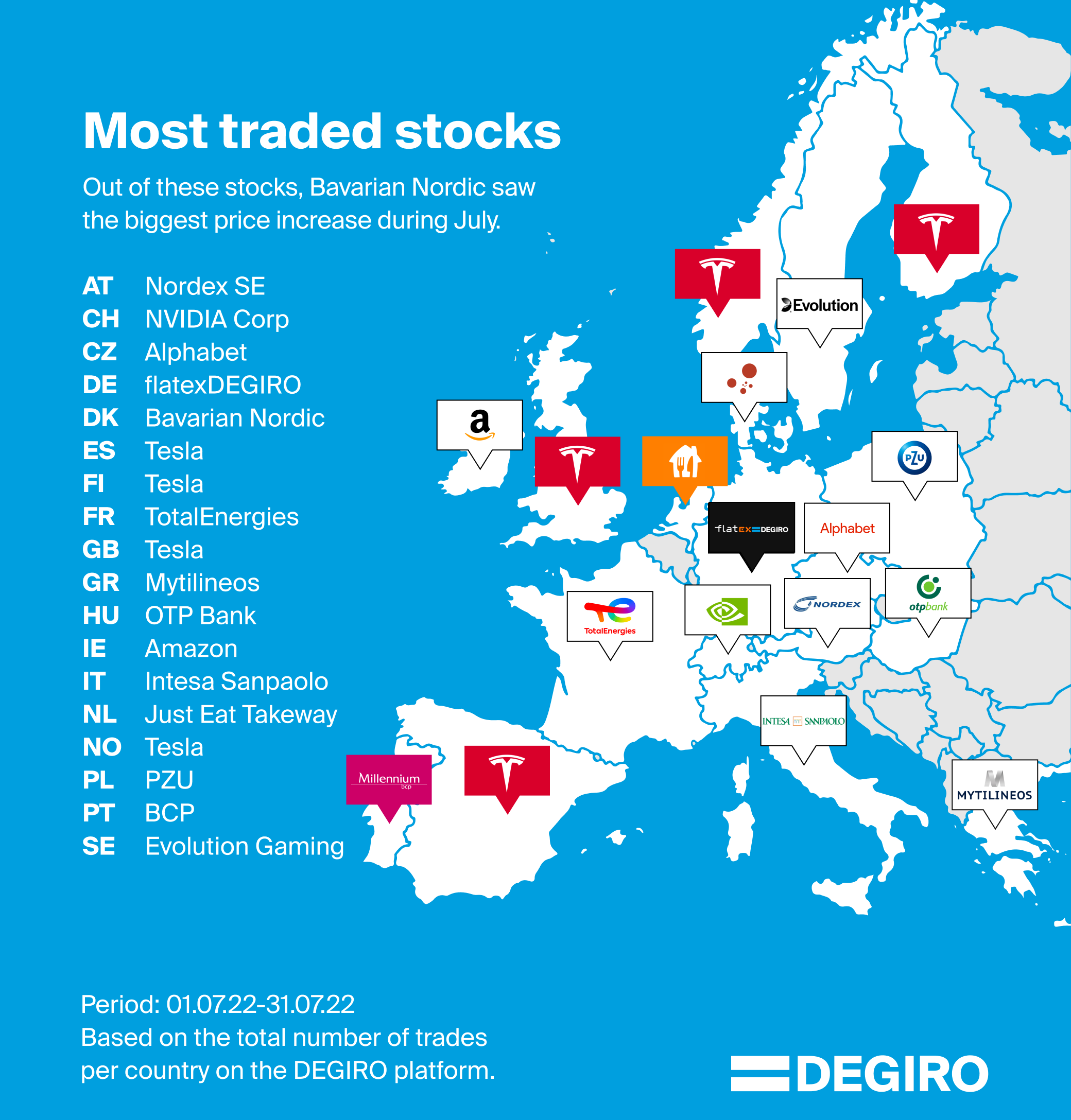 Newbies on the map

In July, two companies made their debut on our map, being traded the most for the first time. Since they are new names, here’s a brief introduction of each:

While Alphabet is a new name on our map, its likely a company that you’re familiar with. If not, maybe you know it by its former name Google. The company used to operate under the name Google but changed its name to Alphabet, making Google a subsidiary back in 2015.

On July 18th, both classes of shares underwent a 20-for-1 stock split. Before the split, Alphabet traded above $2,000, and are now trading in the $100 range. Companies typically split their stock to bring down the price and make it accessible to more investors.

Also new on our map is the Greek industrial company Mytilineos, which dates back to 1908. While considered an industrial company, Mytilineos is heavily involved in the energy sector. It specialises in power generation, gas trading, operating industrial and renewable energy plants, and producing aluminum, among other things. Mytilineos operates in 30 countries and is a major Greek exporter, accounting for more than 2% of all exports from the country.

Danish biotechnology company Bavarian Nordic posted the biggest gain out of the stocks on the map in July. The company’s stock price has been gaining since May due to the monkeypox outbreak, which the World Health Organization (WHO) declared a public health emergency at the end of July. At the time of writing, Bavarian Nordic is the only company with an approved vaccine for monkeypox.

Banco Comercial Portugues (BCP), also known as Millennium bcp, was on the losing end. In July, the company warned that its earnings from the polish market would take a hit in the upcoming quarter as the Polish government takes steps to try to ease the cost-of-living crisis in the country. Other banks, including Commerzbank, ING and Santander, have also flagged the impact of the Polish government’s measures on their businesses.

We want to make investing accessible to everyone by offering investing with incredibly low fees. For details, please visit our Fees page.

Most traded stocks by country: June 2022

Most traded stocks by country: May 2022

We want to empower people to become the best investors they can be. By offering a universe of possibilities and choices on our user-friendly platform, we are removing barriers to make investing accessible to everyone: beginners or experts. You get access to a wide variety of products on more than 50 global exchanges to have the freedom to invest the way you like. In our world, you also get great value for money. So, without compromising an inch on the quality, security and range of our investment services, we offer incredibly low fees. Prioritising your needs has helped us become the leading European online broker. Our 2+ million clients and 80+ international awards are proof of our success.