Most traded stocks by country: July 2020

July was the first time this year in which the EURO STOXX 50 and the S&P 500 ended on opposite sides of the spectrum. The EURO STOXX 50 hit a 4-month high on the 21st of July after European Union leaders agreed on a historic stimulus package worth €750 billion to help counteract the economic impact of the pandemic. Following this, however, the index fell and ended the month down by 1.85%. On the other hand, the S&P 500 posted gains for the fourth month in a row, ending July up by 5.51%.

In this article, we share the sector that was traded the most and July’s biggest winner and loser.

The automotive sector accounted for half of the stocks on the map in July. However, it wasn’t due to Tesla having a dominant presence on the map as we have seen earlier this year. NIO made an appearance for the first time and was traded the most in four of our countries.

If you aren’t familiar with NIO, it is an electric car company that is headquartered in Shanghai. While NIO has not yet released its full Q2 2020 results, the company provided an update at the beginning of July, which was received positively by investors. NIO reported that it delivered 10,331 vehicles in the second quarter, a 190.8% increase year-over-year. Founder and CEO William Bin Li said it was the company’s best quarterly performance in its history. Share prices were up by nearly 55% at the end of the month.

Tesla also saw gains July, with stock prices increasing by 32.50%. Despite the pandemic, Tesla’s share price performance has had an impressive run this year. In July, the momentum continued and prices reached a new intraday high surpassing the $1,700 mark. Similar to NIO, Tesla announced its quarterly deliveries at the beginning of the month. A reported 90,650 vehicles were delivered, which beat analysts’ average estimate of 83,000 according to Bloomberg. 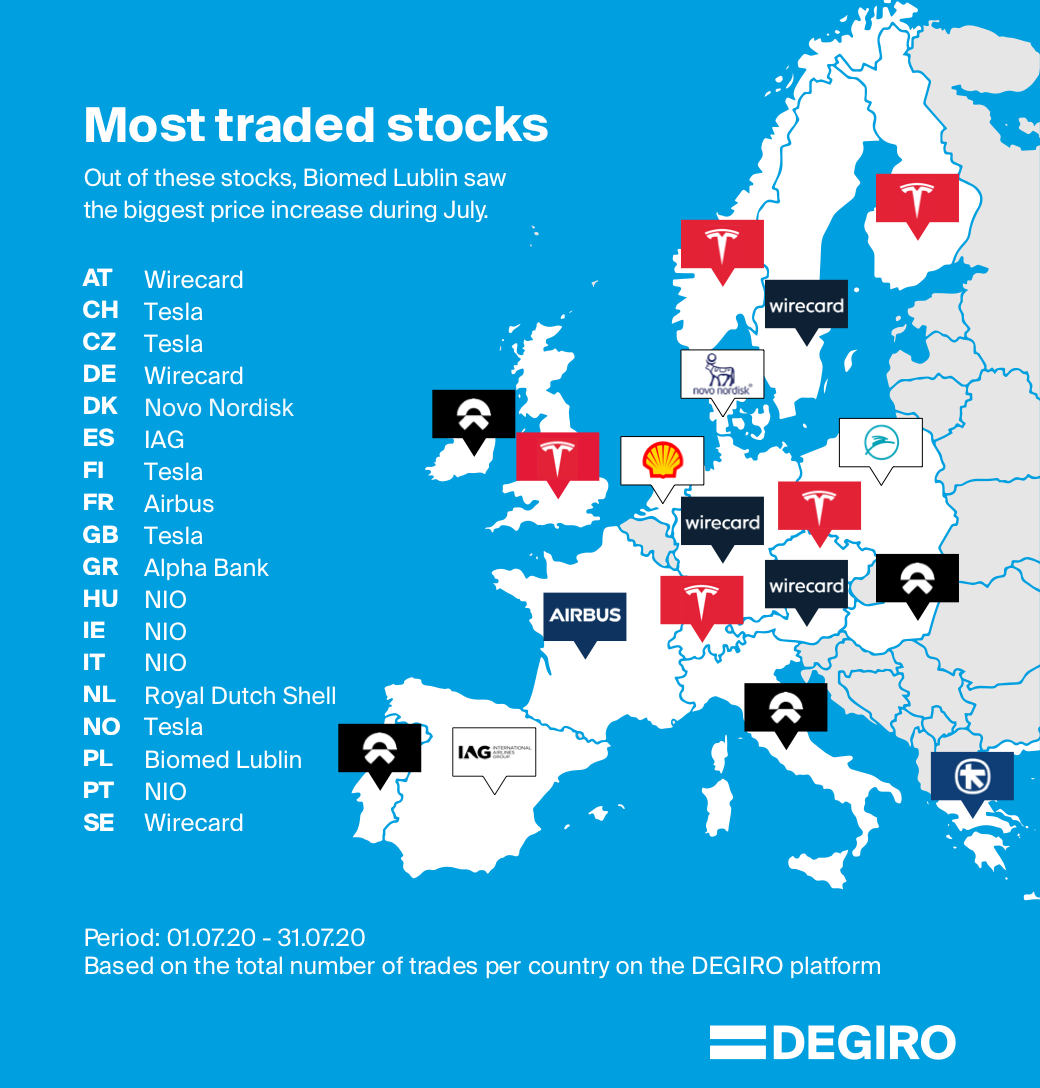 The companies that saw the biggest price movement during June were Biomed Lublin and Wirecard. Biomed Lublin was the winner this month, ending the month up by 258.21%. Wirecard was on losing end, with prices dropping by 66.21%.

Biomed Lublin is a small-cap biotech company based in Poland. The company manufactures and distributes prescription drugs as well as other medical products.

Like many other pharmaceutical companies, Biomed Lublin is working on a drug for Covid-19. The drug is derived from plasma from healthy individuals that possess Covid-19 antibodies. At the beginning of July, the company signed deals with multiple blood banks whereby it will use donated plasma for the production of the drug. After production, it will begin clinical trials.

After an accounting scandal that resulted in Wirecard filing for insolvency and a 93.94% drop in share prices in June, prices continued to fall during July.

According to a section of Wirecard’s website called ‘Transparency’, the company is moving forward with preliminary insolvency proceedings for its assets. At the end of July, it was reported that there were over 140 interested parties in its core businesses or affiliated companies.

Most traded stocks by country: June 2020