Most traded stocks by country: February 2020

As another month has come to a close, it is time to shed some light on what our clients were trading in February. Last month, stock markets around the world were shaken up due to the coronavirus. The EURO STOXX 50 and the S&P 500 ended the month down 8.55% and 8.41% respectively. Both indices saw the biggest weekly losses in the past decade. Out of the stocks seen on the map, Tesla and Novacyt saw positive price increases, whereas Eurobank Ergasias, Royal Dutch Shell and CD Projekt did not. 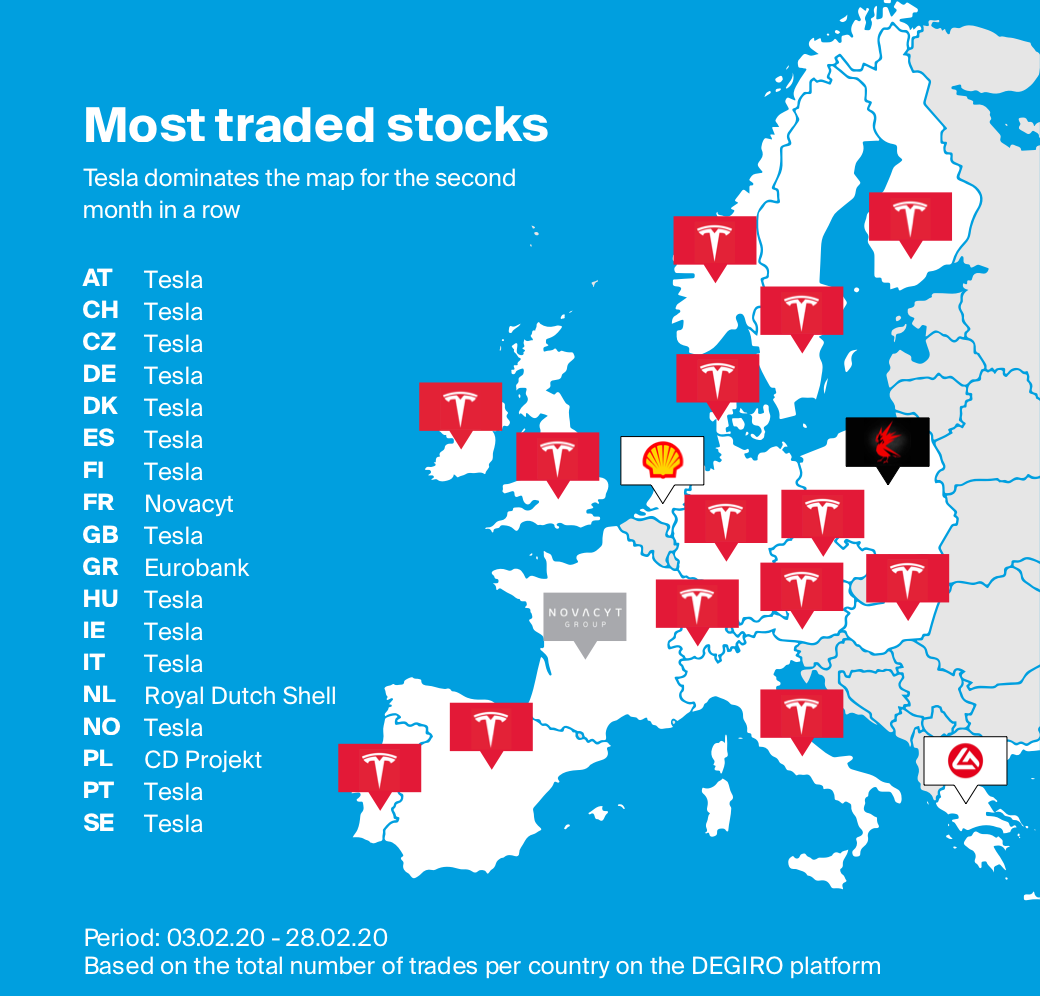 The automotive sector was again the most traded in February, with Tesla (ISIN: US88160R1014) being the most traded stock in fourteen out of the eighteen countries that we are active in. In January, Tesla set a new record as share prices breached $650 for the first time. The momentum continued and prices hit a record high of $968.99 on the 4th of February. However, prices dipped back down the next day after the company announced that deliveries of the Model 3 cars would be delayed due to the outbreak in China. On the last trading day of the month, Tesla closed at $667.99, a 2.61% monthly increase, but down 31.06% from its high.

Tesla also announced last month that it intends to raise $2 billion in a common stock offering. This was surprising to some because at the end of January, Elon Musk said that it did not make sense for the company to raise more money. Out of the $2 billion, Musk is said to purchase up to $10 million worth of shares and Larry Ellison, a board member and the co-founder of Oracle, will purchase up to $1 million worth of Tesla shares. The proceeds from the offering are planned to be used to strengthen Tesla’s balance sheet and for other general purposes.

Out of the stocks on the map, Novacyt (ISIN: FR0010397232) saw the biggest price movement, with an increase of 73.47%. Novacyt is a French biotech company that specialises in clinical diagnostics. It has a market cap of around €110 million and, therefore, can be categorised as a micro-cap stock. Generally speaking, micro-cap stocks can come with more risk compared to the stocks of bigger companies. This is because large-cap companies (market cap of $10 billion or more), for example, typically have more resources to withstand economic downturns.

On the 31st of January, Novacyt announced the launch of a new molecular test for the coronavirus that it believes to be more specific than other tests that are available. The company then launched its CE-Mark molecular test for the clinical detection of the coronavirus on the 17th of February. The grant of the CE-Mark means that laboratories and hospitals can use Novacyt’s test without the need for clinician’s validation. At the end of the month, Novacyt also announced that it had signed a distribution deal to supply its test in two territories outside of mainland China and a manufacturing deal with an unnamed US company.

Would you like to add one of the companies you see on the map to your portfolio? Would adding one of these companies to your portfolio help to diversify it? With DEGIRO, a diversified portfolio is easily obtainable with access to more than 50 exchanges across 30 different countries. In addition to our global reach, we also offer investing with incredibly low fees so the impact of transaction costs on your return is minimised.

Most traded stocks by country: January 2020