Most traded stocks by country: April 2021

In this article, we share the stocks that made an appearance on our map for the first time and the ones that saw the biggest price movements. 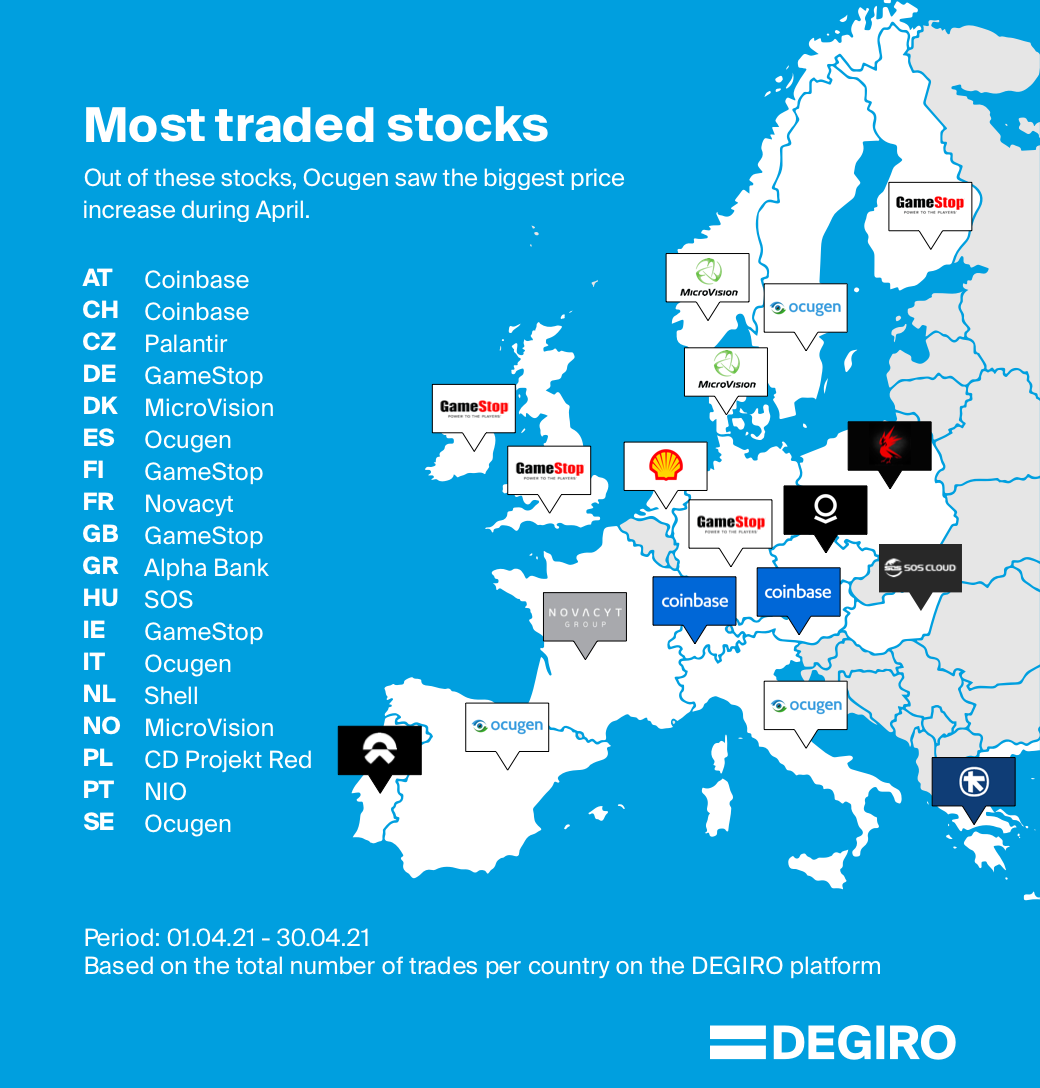 While we see some companies on the map month after month, four companies made their map debut, all of which are American companies:

Not only did Coinbase make its debut on our map, but it also made its debut on the stock market. On the 14th of April, Coinbase went public on the Nasdaq through a direct listing, a less traditional route compared to an initial public offering (IPO).

Coinbase is the largest US cryptocurrency exchange, and it made history being the first major crypto company to go public. Since the company went public through a direct listing, shares were not officially priced before they started trading. However, to help investors get an idea of the company’s value, a reference price of $250 was set on the 13th of April.

Ocugen was traded the most by our Spanish, Italian and Swedish investors. It is a biopharmaceutical company based out of Pennsylvania that mainly focuses on developing therapies for eye diseases.

Ocugen is also involved in the development of a Covid-19 vaccine. At the end of 2020, Ocugen entered into a partnership with Indian drug maker Bharat Biotech to bring Bharat Biotech’s vaccine Covaxin to the US market. On the 21st of April, Bharat Biotech announced its second interim results of a late-stage study of its vaccine in India. The results indicated a 78% efficacy against Covid-19. At the end of April, stock prices were up by 86.60%.

Another newcomer to the map was Palantir, a software company based in Colorado that specialises in big data analytics. It was traded the most by our Czech clients. The company was founded in 2003 and named after the magical ‘seeing stone’ in “Lord of the Rings.” With its three main products Gotham, Foundry and Apollo, Palantir serves a wide range of customers, including government agencies, financial firms, manufacturers and more.

At the beginning of April, Palantir announced that it was selected by the National Nuclear Security Administration (NNSA) to provide its security platform in a 5-year deal worth up to $89.9 million. This news, however, did not seem to have a positive impact on share prices as they decreased by 1.07% during the month.

Lastly, MicroVision made our map for the first time and was the most traded stock by our Danish and Norwegian clients. The company develops laser beam scanning technology and is headquartered in Washington.

MicroVision is one of the latest so-called meme stocks. On the 26th of April, MicroVision was the most mentioned stock on Reddit’s WallStreetBets forum, and prices jumped by 47.13%. However, prices plunged by 23.75% the following day.

MicroVision’s stock price fell further following its first-quarter 2021 results announcement on the 29th of April, reporting earnings-per-share (EPS) and sales figures that missed analysts’ estimates. Shares closed down by 17.79% at the end of the month.

Out of the stocks on the map, Ocugen’s 86.60% increase made it April’s winner. On the losing end was small-cap French biotechnology company Novacyt, with prices decreasing by 37.61%. Novacyt specialises in clinical diagnostics and also manufactures Covid-19 test kits. On the 9th of April, the company announced that it had failed to extend its contract with the UK Department of Health and Social Care (DHSC). Following the announcement, share prices fell sharply by 38.41%.

Most traded stocks by country: March 2021

Most traded stocks by country: February 2021