IPO stands for initial public offering. This is the process in which a privately held company sells shares on the stock market, making it a publicly traded company. The Dutch were the first to put this modern practice into place back in 1602 when the Dutch East India Company offered shares of the company to the public in order to raise capital. Moreover, going public is a way in which companies can access capital they can use to grow the business. We’ve already seen a lot of prominent companies launching an IPO this year, and there are more to come.

Most traded in August

In August, the top 3 most-traded IPOs through DEGIRO were Beyond Meat, Uber and Pinterest respectively. For these 3 companies, we have also looked at the change in price since the day that they became publicly tradable. What makes these 3 so popular? 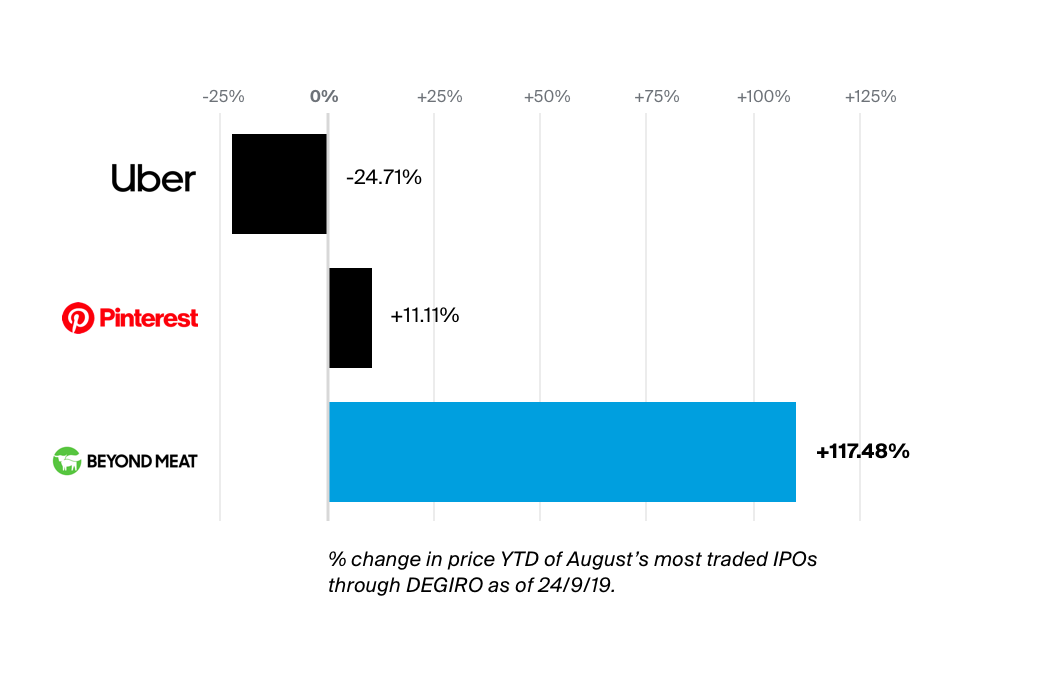 Beyond Meat is the top traded 2019 IPO in August via DEGIRO. Founded in 2009, Beyond Meat is a food company which manufactures plant-based alternatives for meat products. The company’s products are sold internationally in grocery stores, restaurants, and food-service operations. Beyond Meat began trading on the NASDAQ on May 2nd, with an IPO price of $25 per share but began trading at $65.75, 165% above its IPO price. Since its launch, Beyond Meat’s price has soared and is now trading around $142, making its market capitalisation $8.66 billion. Out of the top traded IPOs through our platform, Beyond Meat has had the biggest percent change in price, at 117.48%.

The second top-traded IPO on the DEGIRO platform this year is Uber. Uber is a multinational transportation network company that offers services such as ride sharing, food delivery, bike rentals, shipping, and more. Uber was a highly anticipated IPO this year, though it has not been as successful as expected. Uber’s IPO was priced at $45 per share but started trading at $42. Since it started trading, as of 24/9/19, there has been a -24.71% decrease in price. Uber has a substantial market capitalisation of $53.21 billion.

Third most-traded was Pinterest. Pinterest is a social media network, which has grown in popularity since its launch in 2010. The company offers a web-based bulletin board where users are able to share or pin images related to goods, services, projects, and food. When users pin an image, it is then saved and can be organised into different categories, making it easy to go back to and find. It has become a source of inspiration for many. Pinterest’s IPO price was $19 per share and began trading on April 18th at $23.75. As of end of day 24/9/19, there has been an 11.11% increase in share price. The company’s market capitalisation is currently $14.71 billion.

What is yet to come?

The We Company, Postmates Inc., and Peloton Interactive are highly anticipated IPOs, which are expected to launch before the end of the year. The We Company, owner of WeWork, has been in the news a lot lately regarding its IPO. The company’s valuation has dropped significantly and its IPO date has been postponed. WeWork’s CEO Adam Neumann has even stepped down after receiving pressure from investors to do so. Regardless, the We Company has reported it still plans to execute an IPO before the end of the year.

Investing in IPOs through DEGIRO

Via our platform, you can invest in IPOs once the product starts trading on an exchange that we offer. Unfortunately, it is not possible to invest in IPOs via our platform before the security in question begins trading. Beyond Meat, Uber, and Pinterest, as well as the other IPOs mentioned all trade on a US exchange. For the US exchanges, we offer the low fee of €0.50 + USD 0.004 per share.