The most downloaded apps during Q1 2020

Can you guess what the most downloaded app in Europe during the first quarter was? A recent report published by SensorTower, an app analytics company cited by Bloomberg, revealed this as along with other app downloading trends seen in Q1 2020. During this time, travel bans, lockdowns and stay at home measures were put into place on a global scale to curb the spread of the coronavirus, and people downloaded more apps. There was a 20.3% increase in worldwide app downloads from the same period year-over-year. In this article, we share which apps were downloaded the most and information about the app’s parent companies.

Which apps were downloaded the most?

Facebook is likely not a stranger to most. The company initially launched back in 2004 with its social networking service, which was called TheFacebook at the time. Since then, it has grown to be one of the biggest tech companies in the world.

Seven years after the Facebook platform was launched, Facebook released its Messenger app. Unlike the Facebook platform and Messenger app, the company did not create Instagram and WhatsApp. Facebook bought the photo and video sharing app, Instagram, in 2012 for $1 billion. Its acquisition of WhatsApp, the messaging and calling service, is its biggest to date. The deal went through back in 2014 for $22 billion. The Facebook apps collectively had an average of 2.36 billion daily users in March 2020, an increase from 2.26 billion reported in December 2019.

Many companies have been negatively impacted by the implications of the pandemic and, for some, this may be reflected in lower share prices. However, this is not the case for Facebook. The company reported Q1 2020 earnings that beat analysts’ estimates. Share prices also recently hit a record closing high of $229.97 on May 20th. This came a day after the company announced it’s launching of Facebook Shops, a service that enables small businesses to more easily sell their products on Facebook’s platforms. The previous closing high was on January 29th of this year at $223.23.

Due to its growth in popularity, it may not come as a surprise to some that TikTok was individually the most downloaded app in Europe in Q1 2020. However, it is second on our list as we grouped the Facebook apps, as mentioned above. TikTok is a social media app that allows users to create and share short videos. According to SensorTower, the app saw 315 million total installs in Q1 2020, breaking the record for most installs in a quarter. The record was previously held by Pokémon Go with 308 million installs in Q3 2016.

TikTok is owned by a Beijing-based company called ByteDance. It was launched in 2012 and released its first product called Toutiao, a content discovery platform, that same year. ByteDance released Douyin four years later, which is its version of TikTok for the Chinese market. TikTok was then launched in 2017 outside of mainland China. Aside from the aforementioned, ByteDance has several other products and services including Xigua Video, Helo, Lark and more.

In addition to being the most downloaded app individually in Europe, it was also the most downloaded in the US during the first quarter. This comes despite the US government raising concerns about privacy and censorship. Last year, US officials labeled the app as a threat to national security. ByteDance has responded by separating management for TikTok between the US and China and hiring local experts. For example, ByteDance recently appointed The Walt Disney Co.’s former head of streaming, Kevin Mayer, as CEO of TikTok.

ByteDance is currently a private company, meaning that you are unable to trade it at this time. This also means that ByteDance does not have to publish any financial reports. However, based on recent private share transactions, it was estimated in May 2020 that ByteDance is valued anywhere between $105 billion to $140 billion, making it the world’s most valuable startup. In March 2020, ByteDance’s founder, Zhang Yiming, said that the company does not have any imminent plans for an initial public offering (IPO) but it is internally making preparations.

Telegram was also one of the most downloaded apps in Europe during Q1 2020. It is a non-profit, cloud-based messaging service that can be used across devices. Unlike other messaging apps and services, Telegram does not sell users’ personal data or use it for ad targeting. The company values internet privacy and data security and has built its infrastructure around it. Telegram even has a special feature called ‘secret chats’ that use end-to-end encryption so they cannot be traced back to servers and the messages can self-destruct.

The app has quickly grown since its launch in 2013. Telegram reported 400 million monthly users as of April 2020. The company was founded by Pavel Durov and his brother Nikolai. Pavel Durov is referred to as the ‘Mark Zuckerberg of Russia’ because before founding Telegram, he created one of the most popular social networks in Russia called Vkontakte. Although it was initially founded in Russia, the company relocated due to “local IT regulations” in Russia. Today, it is based in Dubai and claims to have no ties with Russia.

Telegram has been criticised over the years due to its censorship policies in relation to terrorist groups and extremists using the app. In 2015, it was found that some of Telegrams channels were being used by ISIS to spread propaganda, communicate with one another and publish official statements, such as claiming responsibility for the Paris attacks. Telegram responded by blocking 78 ISIS-related channels and made it easier for users to report content. More recently, in March 2020, a man in the US was shot and killed by the police as he planned an attack on a hospital where coronavirus victims were being treated. Hours before, the man had posted anti-Semitic remarks on two white supremacist groups. During this same month, channels related to racism and white supremacy grew by more than 6,000 users. The company’s website says that it does remove terrorist content but will not remove content that expresses alternative views. Critics, such as the Anti-Defamation League, say that more needs to be done.

Telegram is a privately held company so it cannot be traded. In 2017, Durov said that he would not sell the company for any price, not even for $20 billion. At that time, it was estimated that the company was worth $5 billion.

Coming in at number four is Netflix. As you may know, Netflix is a subscription-based streaming service that allows users to watch TV shows and movies on a variety of devices. The company offers licensed content on its platform as well as original content.

Netflix, Inc. was founded in 1997 as an online movie rental service, a concept that may be a thing of the past to some. Netflix’s subscription service was then launched in 1999, where subscribers could pay a flat monthly fee for unlimited DVD rentals. Its streaming services as we know them now were later introduced in 2007. As per Netflix’s Q1 2020 financial results, the company has over 167 million paid memberships in over 190 countries.

In its Q1 2020 letter to shareholders, Netflix said that its membership growth accelerated in the first quarter and attributed this to home confinement as a result of COVID-19. The streaming giant also announced that it would be asking users that have not used their accounts for more than a year if they would like to continue their subscriptions. If users do not respond, Netflix will cancel the inactive accounts, which account for around 0.05% of its member base. This might seem counterintuitive for a company that makes its revenue primarily off monthly fees. However, the company said it doesn’t want people paying for something that they do not use.

Last on the list is Snapchat, owned by Snap Inc. The Snapchat app allows users to communicate and interact with each other by sending and posting pictures and videos called ‘snaps’. The app also includes a number of other features such as augmented reality filters called Lenses and a page called Discover, which is a feed of various content channels.

The company was founded back in 2011 and the first version of the app was called Picaboo, but was rebranded to Snapchat shortly after. Snap Inc. also used to go by a different name. The company was initially called Snapchat Inc. but changed to operate under a parent company called Snap Inc in 2016. The name was changed due to new products being added to the company’s portfolio alongside the social app.

Today, Snap Inc.’s three main products are Snapchat, Spectacles, smart glasses designed to be used in conjunction with Snapchat, and Bitmoji, an app that allows users to design cartoon characters of themselves.

Similar to Facebook, Snap Inc. reported a surge in Snapchat users during the first quarter. There were 229 million daily users during this time, a 20% increase year-over-year. A main source of Snap Inc.’s revenue is from advertising within the Snapchat app. The company said that strong revenues in the first two months of Q1 2020 offset slower growth in advertising revenues in March. However, losses in advertising revenue are expected to be less for Snap Inc. compared to some other companies because it does not have as many small advertisers, which may be more susceptible to cutting advertising budgets due to implications of COVID-19. 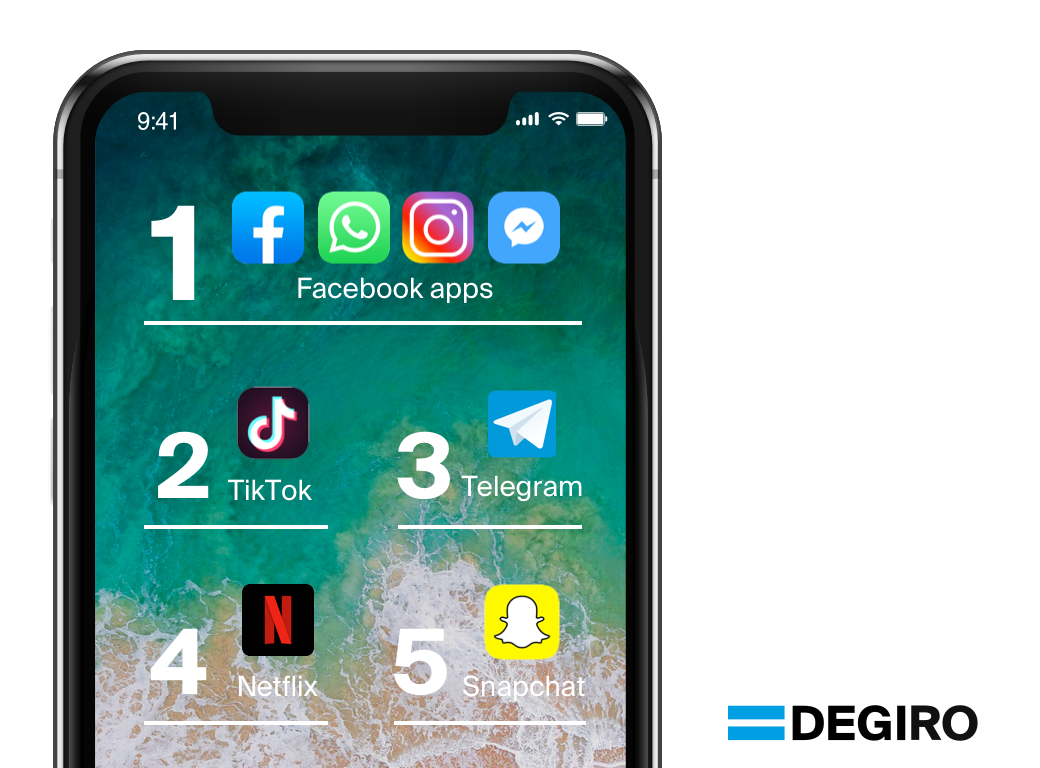 As mentioned, because ByteDance and Telegram are currently privately held companies, you cannot trade them. Facebook, Netflix and Snap Inc., however, are available on the DEGIRO platform. Both Facebook and Netflix are available to trade via DEGIRO on the NASDAQ, Xetra and Börse Frankfurt and Snap Inc. can be traded on the New York Stock Exchange and Xetra. Fees vary for all other exchanges. For details, please visit our Fees Page.