What’s going on with oil prices?

Global markets have been significantly impacted since the spread of COVID-19. The oil industry, in particular, has taken a hit, with oil prices dropping more than 60% in the first quarter of 2020. In this article, we provide some fundamental background information about the commodity, shed some insight on the current situation and list some common ways to invest in oil.

With high oil prices in the early 2000s, unconventional oil extraction methods became more cost competitive. The US capitalised on this, and the production of shale oil enabled the US to become the biggest oil producer in the world for a period of time.

Two of the main benchmarks for oil prices around the world are Brent Crude and West Texas Intermediate (WTI). Brent typically serves as the global oil price benchmark and WTI is the benchmark used in the US. In terms of location, Brent Crude refers to oil that is sourced from four fields in the North Sea: Brent, Forties, Oseberg and Ekofisk. WTI includes oil that is extracted from the US, typically in the Midwest and Gulf Coast regions. Both Brent Crude and WTI are classified as light, sweet oil, which is ideal for refining into gasoline.

Like anything else, the price of oil is heavily dependent on supply and demand. As a rule of thumb, when supply is greater than demand, prices tend to fall, and vice versa.

The Organization of the Petroleum Exporting Countries (OPEC) plays a large role in the supply of oil. OPEC is currently made up of the following thirteen countries: Algeria, Angola, the Democratic Republic of the Congo, Equatorial Guinea, Gabon, Iran, Iraq, Kuwait, Libya, Nigeria, Saudi Arabia, United Arab Emirates and Venezuela. OPEC aims to coordinate and unify oil production and policies among its member states in order to stabilise oil markets. Aside from the mentioned OPEC countries, ten other countries are OPEC allies, collectively known as OPEC-plus. Some of the notable countries within this allegiance are Russia, Mexico and Kazakhstan.

In 2018, it was estimated that OPEC countries account for 79.4% of the world’s proven oil reserves. The US Energy Information Administration (EIA) also estimates that OPEC produces approximately 40% of the world’s crude oil and its exports represent around 60% of oil traded worldwide. When OPEC has reduced production targets, historically, oil prices have increased.

On the demand side, economic growth and industrial production can increase demand for oil. Other factors that can affect it include growing populations and increased transportation. Demand can also increase depending on the season. For example, in the winter months, more oil is used to heat homes.

An oil producer’s breakeven is distinguished from fiscal breakeven oil prices. In regards to an oil producer’s breakeven price per barrel, its capital spending, production costs, administrative and transportation costs and gross taxes are all taken into account. This is why oil companies’ costs can significantly vary from one another. If one oil company drills oil from oil pools near the surface, it may have lower capital costs in comparison to a company that drills off shore and might require more resources. Oil producers in Saudi Arabia, for example, do not have to pay taxes, whereas taxes can be a major expense for others. For an example of how these figures can vary, in 2018, it was reported that BP’s breakeven price was $46 and Royal Dutch Shell’s was $58.

Recently, oil prices have experienced drops that haven’t been approached since the 1991 Gulf War. The alliance between oil producing giants, Saudi Arabia and Russia, became strained on the 6th of March 2020 when they failed to reach an agreement in regards to oil output. Saudi Arabia urged Russia to cut back production by 1.5 million barrels a day for the rest of the year due to the impact that COVID-19 has had on demand, however, Russia was not on board. In response, Saudi Arabia promised to ramp up oil production and slash prices.

Even while parts of the global economy are shutting down in efforts to control the spread of the coronavirus, oil continues to flood the market, putting downward pressure on prices. With oil prices around $20-$25 per barrel, a majority of companies may be operating at a loss depending on its breakeven price. The US shale industry is particularly vulnerable to this. The breakeven for US shale oil companies lies around $48-$54 per barrel. Only five US shale companies are profitable at $31 per barrel. Bloomberg has indicated that the current situation could force as many as 70% of US shale drillers into bankruptcy.

Saudi Aramco has said that it is ‘very comfortable’ with prices at $30 a barrel. Whether its breakeven is below this or not, some bigger companies may have a cushion that allows them to operate with losses for some time. Some smaller companies, on the other hand, may feel the pains from losses already.

On the 30th of March 2020, the WTI benchmark fell briefly below $20 and Brent hit its lowest level in 18 years. It was reported on the 25th of March 2020 that in order to balance the market, Russia and Saudi Arabia would need to completely stop all output. The oversupply is estimated at 20 million barrels per day. 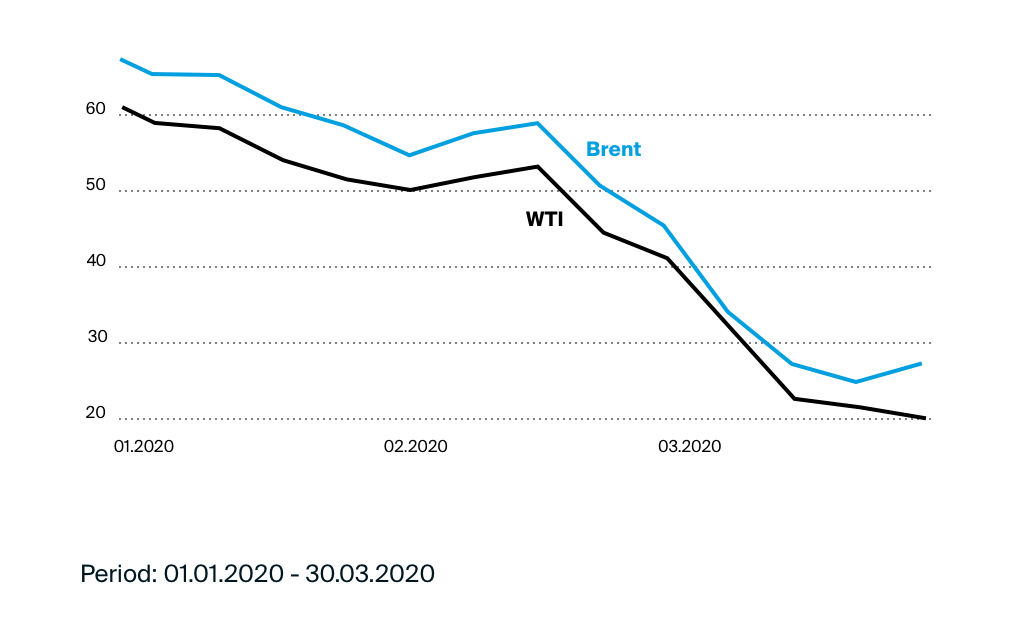 How to invest in oil

There are several ways in which you are able to invest in oil/the oil industry. Below are some of the common ways: