Before smartphones, ordering a restaurant meal from your phone to be delivered to your door by a third-party company was unheard of. However, times have changed and online food delivery has evolved. In 2019, the once non-existent food delivery services industry had an estimated value of $107.44 billion. Current expectations are that this industry will reach $154.34 billion in 2023, as per Businesswire.

There have been many mergers and acquisitions among companies engaged with on-demand delivery, with some high-profile deals taking place in the past two years. In this article, we discuss the companies in this space that have been most traded via our platform and their consolidation efforts.

Alibaba is the parent company of Ele.me, which translates to ‘Are you hungry?’. Ele.me was founded in 2008 and has grown to be one of the biggest food delivery players in China.

Alibaba acquired Ele.me in April 2018 in a deal that implied a valuation of $9.5 billion. Before the acquisition, Alibaba had already owned around 43% of the company’s voting shares. The acquisition is said to be in line with its ‘New Retail Initiative’. The goal of the initiative, announced in then CEO Jack Ma’s 2017 letter to shareholders, is to integrate online and offline businesses and focus on customisation for customers.

China’s food delivery services market is the biggest in the world with an estimated worth of $85.4 billion in 2019. Of this, Ele.me and rival Meituan Dianping, which is publicly traded and backed by Tencent, control 90% of the market share.

Alibaba reported that revenue from Ele.me was down 8% year-over-year in its Q1 2020 results. The company reported that this is due to the mass closures of restaurants and local merchants during this time to curb the spread of the coronavirus in China.

Five years after Uber was founded, Uber Eats was launched in 2014 as Uber Fresh. It was rebranded a year later as Uber Eats. Uber Fresh was initially integrated into the Uber app but released a separate app for Uber Eats in 2015.

Uber’s main source of revenue comes from its ride-hailing service, but revenue from food delivery has become more significant for the company during the pandemic. In its Q1 2020 results, Uber reported that quarterly bookings from ride-hailing customers declined for the fist time ever due to implications of the coronavirus. However, these losses were partially offset by a 52% surge in food delivery gross bookings year-over-year. Net revenue for Uber Eats increased by 121%, accounting for around 16% of Uber’s total net revenue.

In furthering its delivery efforts, Uber had made an offer in May 2020 to acquire Grubhub Inc., a prominent American food delivery service, but was beat out by Just Eat Takeaway. Uber announced in July 2020 that it would instead be acquiring Postmates for $2.65 billion in an all-stock transaction.

Postmates was founded in 2011 and is one of the big players in the American food delivery service industry. In addition to delivering take-away from restaurants, Postmates also enables delivery from grocery stores, pharmacies, convenience stores, liquor stores and more. Uber’s acquisition is expected to close in Q1 2021.

At the beginning of 2020, it was noted that the merged company had 23 subsidiaries, most of which being in Europe, but also in Canada, Australia and Latin America. More recently, Just Eat Takeaway announced in June 2020 that it would be acquiring publicly-traded Grubhub for $7.3 billion.

The deal will enable Just Eat Takeaway to launch in the US via Grubhub. According to Just Eat Takeaway’s announcement on the matter, it will create the world’s largest online food delivery company outside of China. 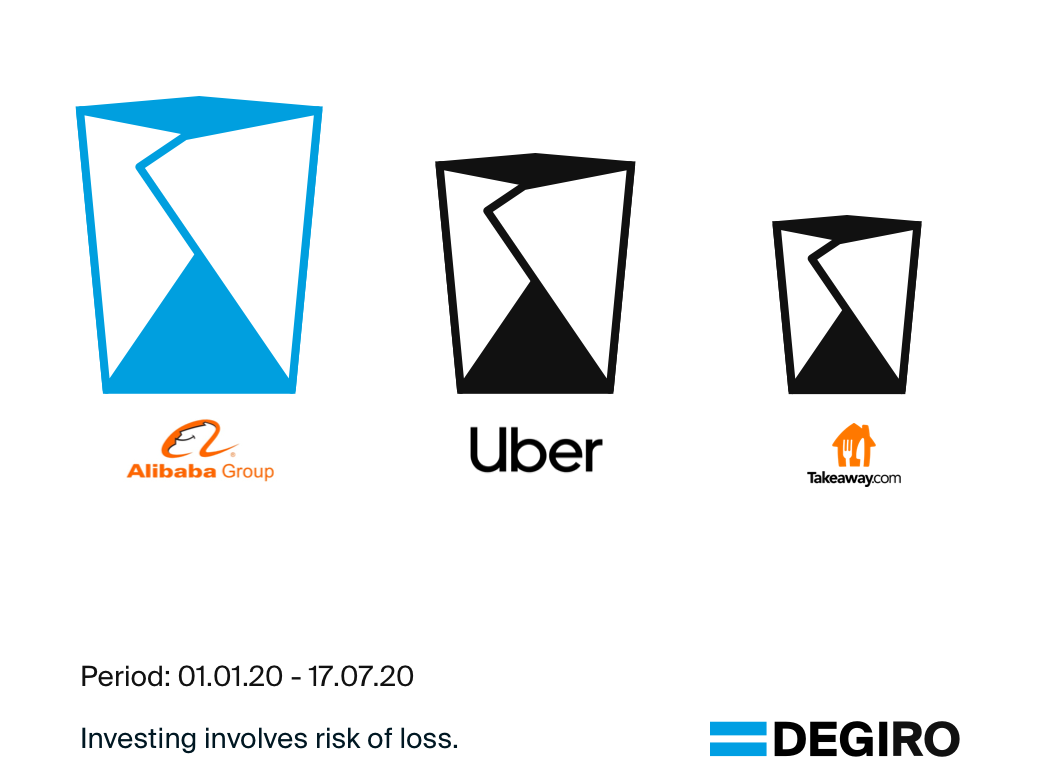 Would you like to invest in one of the companies mentioned in this article? Alibaba, Uber and Just Eat Takeaway are available to trade via DEGIRO on more than one exchange:

Please note that the transaction fees vary depending on the exchange. Please see our Fees page for more information.

The most downloaded apps during Q1 2020