Looking beyond the iPhone

Apple released their 1st half 2019 figures, which indicated that there has been a 14.9% decrease in iPhone sales from the same timeframe in 2018. iPhone sales have historically accounted for over half of Apple’s revenue. For the first time in seven years, this is not the case, with iPhone’s representing 48.29% of Apple’s revenue. Although Apple’s iPhone sales are down, it is not to say that the company is not profitable. Within the aforementioned timeframe, Apple saw a 1.02% increase in total net sales.

Revenue outside of the iPhone

Revenue from Mac increased 5% and makes up 10.82% of Apple’s revenue. Products that are included in this category include MacBook Air, MacBook Pro, iMac (Pro), Mac mini, and more.

iPads also saw growth with a 15.5% increase, to represent 9.33% of revenue. Apple first introduced the iPad to the market back in 2010. Currently, five iPad models offered.

Included in this category are products such as chargers, cases, AirPods, Apple Watch, and more. Wearables, home and accessories experienced the most growth out of the categories with a 36.5% growth, accounting for 10.27% of revenue.

After the iPhone, services make up the biggest portion of Apple’s revenue at 21.29%. Within this timeframe, this sector of revenue grew 15.9%. Some of Apple’s services include the App Store, Apple Music, iCloud, Apple Pay, AppleCare,and Apple News. Moreover, on August 20th, Apple launched a credit card called Apple Card. The card offers a percentage of cash back that gets paid directly into the Apple Cash card in the Wallet app. Apple will also be coming out with their own streaming service, Apple TV+, which is expected to make its debut later this year. 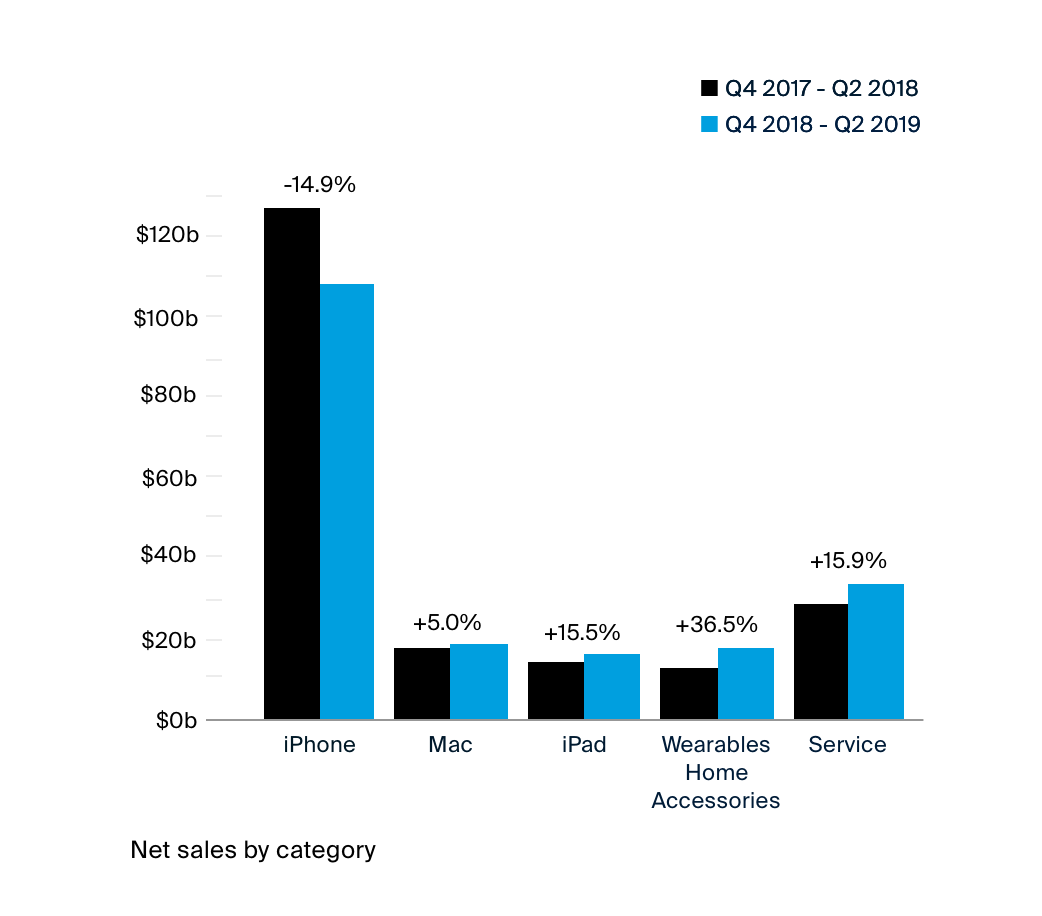 iPhone sales are down everywhere including China, the largest smart phone market. Even with this, Apple has reported that non-iPhone revenue grew 17% in mainland China and that there was growth in every other category. Apple has recently released the new iPhone 11, which includes new features such as a dual-lens rear camera, wide lenses, night mode, and new colour choices. The entry-level iPhone 11 is priced at $699, which is $50 less than the iPhone XR that debuted last year. These price drops could be one way in which Apple is trying to make iPhones more accessible to people. It is too soon to say how the launch of the iPhone 11 will impact Apple's iPhone revenue, so stay tuned. Aside from the iPhone, it is clear that Apple is revving up new streams of income, such as Apple Card and Apple TV+. The company is staying positive as they have said that they expect revenue between $61 and $64 billion for the current fiscal fourth quarter and believe that they are successfully diversifying revenue income away from a single product.

Apple first launched its IPO back in December, 1980, on the NASDAQ for a price of $22 per share. These days, Apple trades well over $200. This month, Apple neared a record as its market cap surpassed the $1 trillion mark.

If you would like to invest in Apple, you are able to through the DEGIRO platform.

What kind of investor are you?