Amazon overshadows the competition in the cloud market

The cloud services market is made up of three main models: infrastructure as a service (IaaS), platform as a service (PaaS), and software as a service (SaaS). Each model of cloud service provides different levels of control, management, and flexibility. Gartner has recently published an article indicating that the IaaS market has grown 31.3% from 2017 to 2018, to total $32.4 billion. According to their research, Amazon is the top vendor, owning nearly half of this sector of the cloud market.

IaaS is a cloud-computing offering, in which users can access computing resources such as storage, servers, networks, and operating systems through virtualisation technology. Customers who use IaaS are able to control their own data infrastructure via a dashboard or API. This sector of cloud services has the highest level of flexibility and management control. Traditionally, without IaaS, this is physically managed on-site. Therefore, IaaS can be more cost-efficient and is often on a pay-as-you-go basis.

The top five IaaS service providers in 2018 include Amazon, Microsoft, Alibaba, Google, and IBM. Together, these five companies account for nearly 77% percent of the IaaS market worldwide. With only five companies owning the majority of the IaaS market share worldwide, there is tough competition for smaller companies who may not have the same scalability as these other giants. However, other companies still take up 23.3% of the market share, which has grown 11.1% since 2017. 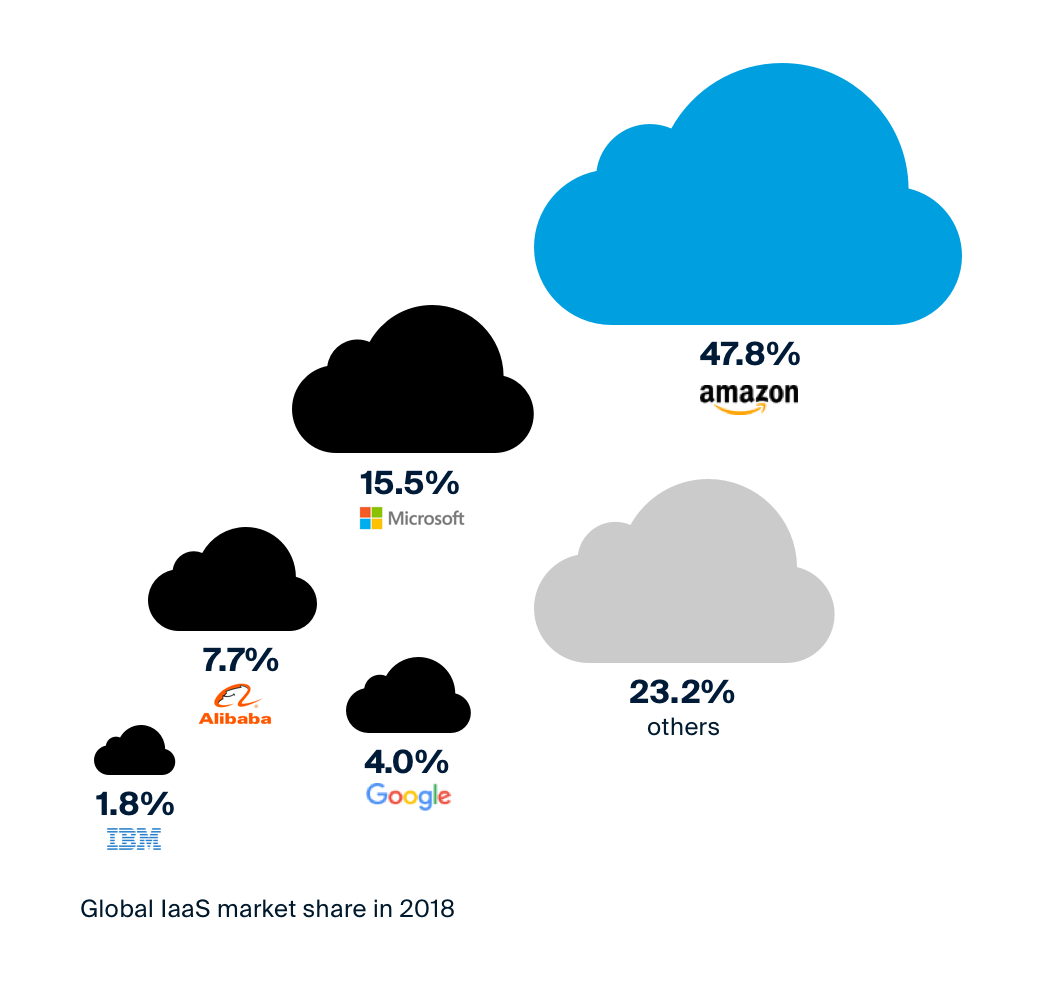 Amazon Web Services, Inc. (AWS) is a subsidiary of Amazon that offers various cloud computing platforms to individuals, companies, and governments. They have over one million customers of all types and offer more than 165 fully featured services from data centers all over the world. Their market share grew 26.8% since 2018, and they now own almost half of the market. In 2018, AWS accounted for 11% of Amazon’s revenue.

Microsoft’s IaaS service is called Azure. Since its launch in 2010, Azure has picked up some noteworthy clientele including Adobe, Malaysia Airlines, Smithfield, and more. With revenue surpassing $5 billion in 2018, Microsoft secured the number 2 spot in the IaaS market in terms of market share.

Alibaba Cloud showed the strongest growth amongst the top vendors in the IaaS market, with a 92.6% growth from 2017-2018. Alibaba Cloud is particularly dominant in the Chinese market, though they offer their services in other regions.

Google’s IaaS service, Compute Engine, is a component of the Google Cloud Platform. Compute Engine also saw considerable growth in 2018 and revenue was over $1.8 billion.

IBM’s IBM Cloud experienced a slight decrease in market share in 2018, going from 1.9% to 1.8%. However, their revenue was still considerable exceeding half of a billion.